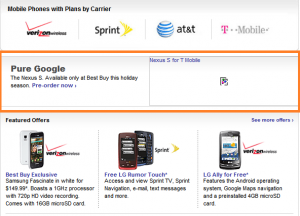 Another day, another Nexus article. First it was the “Nexus Two“, and now it’s the “Nexus S”. According to the guys over at Phandroid, the Nexus S appeared on BestBuy Mobile’s site today. It was quickly removed, but someone managed to get a screen grab (above), which shows us just one sentence and a picture that conveniently isn’t there, but it clearly says “Nexus S”. It’s set to be available at BestBuy in time for the holiday season.

If you look closely enough, you’ll see that in the spot where the picture should be, it says “Nexus S for T-Mobile”. This can really only mean one thing: the N-S is headed to TMo for Christmas. It’s also worth noting that it says “Pure Google”, indicating that we won’t see any of Samsung’s TouchWiz UI on the Nexus S. Good or bad? We’ll let you decide. No word on pricing or specs, or even when it’ll go on sale, but we’ll keep you in the loop. Anyone excited for this device? I know I am!

Thanks to AndroidAndMe and Phandroid for the tip.