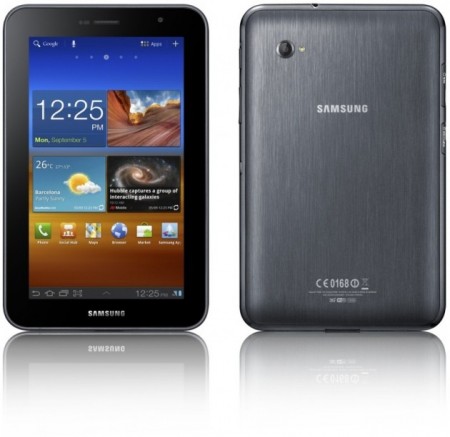 Samsung has added another model to their growing roster (Galaxy Tab 10.1, Galaxy Tab 8.9 and recently the Galaxy Tab 7.7) of Android tablets this morning, unveiling the Galaxy Tab 7 Coming in thinner and weighing less than its predecessor, specifications include a dual-core 1.2GHz processor, 7-inch display (1024×600), 1GB RAM, and a pair of cameras (3-megapixel/2-megapixel).

Unlike the first generation, Samsung has opted to install Honeycomb 3.2 (with Touchwiz), a smart route considering the growing number of apps and games. Additional specs include Wi-Fi connectivity, Bluetooth, GPS, and 3G support.  Look for the Galaxy Tab 7 Plus in 16GB and 32GB flavors.

The Galaxy Tab 7 Plus will make a great alternative to other 7-inch tablets in the HTC Flyer and Amazon Kindle Fire. Initially, Samsung will be launching this in Austria and Indonesia in October, and then later on it will hit American, European and Asian Markets.

Samsung will certainly have to launch this tablet under the price mark of $400 if they want to compete with other 7-Inch tablets. So Galaxy Tab owners, is it time to upgrade to the next level?

Anyone looking forward to the next big thing from Samsung? Tell us in the comment box below.