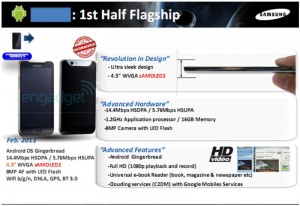 BOOM!  You didn’t think Samsung was gonna ride that Galaxy S train forever, did you?  Looking beyond the Nexus S (yes, already), we have Samsung’s next big thing in our cross hairs.  Maybe huge is a better word.  Engadget has scored some details on a new device slated to roll out in February.  You’ll want to sit down for these.

Described as having either a 4.3- or 4.5-inch “sAMOLED2” touch screen, it’s assumed that a new, improved Super AMOLED display is right around the corner.  The unnamed device is said to run Gingerbread and feature a blazing fast 1.2GHz processor, an 8-megapixel camera with 1080 video recording, and 16GB internal memory. Looking at the pictures, we have an ultra-thin, super sleek phone in the making.