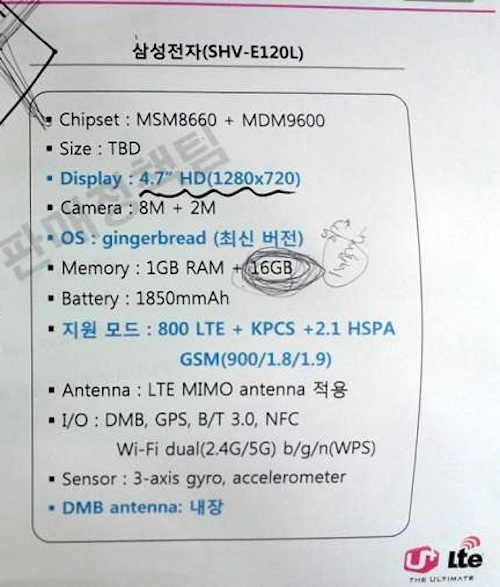 We’ve just gotten wind of a new Samsung device that may be in the works. At the moment, it’s going by the model number SHV-E120L, and it’ll bring a 4.7-inch 720p (resolution of 1280 x 700) HD display, along with 1GB of RAM, 16GB of internal storage, Gingerbread, an 8MP rear camera, 2MP front-facing shooter, WiFi, Bluetooth, GPS, a rather large 1850mAh battery, and LTE support. The device is billed to launch with a 1.5GHz dual-core Qualcomm processor, with an Adreno 220 GPU under the hood.

It’s unclear if this is yet another Galaxy S device, or if it’s just something the geniuses at Samsung cooked up in their spare time. It’s been tipped for a launch in South Korea, but whether or not the rest of the world gets the device is still up in the clouds. Of course, it’s all speculation at this point, so it’s best to just take this with a grain of salt until more is uncovered.

In the meantime, are you impressed with the specs of the SHV-E120L? Disappointed that it won’t be sporting Ice Cream Sandwich? Drop a comment below!