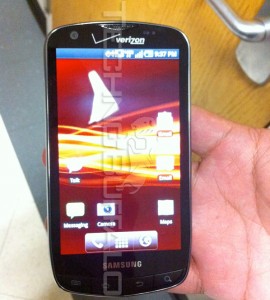 The Samsung Stealth has blown its cover and found itself caught on camera, giving the world a glimpse of the 4G LTE handset. Carrying the model name of SCH-i510, the Android 2.2-powered Stealth is expected to land on Verizon sometime in the middle of April. The hardware situation reads like many of today’s Galaxy S and Galaxy S 2 devices with a 4.3-inch Super AMOLED Plus display, a 1GHz Hummingbird processor, and 8-megapixel camera. Other details include a 1.3-megapixel front-facing camera and support for Wi-Fi (802.1 b/g/n) , Bluetooth, GPS, and HDMI output.

According to a TechnoBuffalo source, the 1500mAh battery provides a full work day charge (8-10 hours) without any issues. This is welcome news considering the battery is rumored to be one of the reasons we’ve yet to see the 4G LTE-ready HTC Thunderbolt.  Hit the TechnoBuffalo article to see another couple of images of the Samsung Stealth.

With a rumored April launch, we’d be very surprised if this doesn’t some sort of appearance at CTIA 2011 in a few weeks.  AndroidGuys will be at the conference, where we’ll get some pictures and impressions of the device. 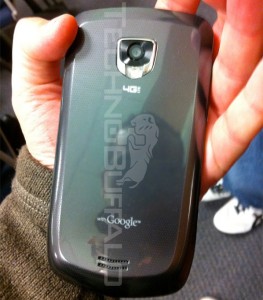