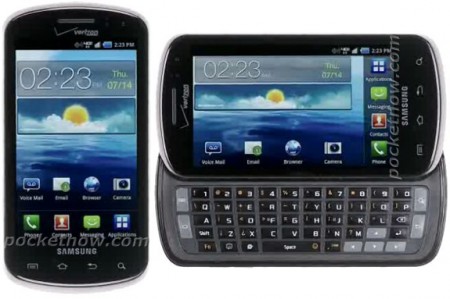 Remember the Samsung sliding QWERTY phone we showed you a few times ago? First we just saw a glimpse of it and then we saw a blurry shot with a lot of info, but now, thanks to a couple images on Pocket-Now, we finally get a full-fledged look at the Samsung SCH-I405 a.k.a Stratosphere.

It’s a good looking device with an impressive sliding keyboard, and word on the street is that Verizon will be launching it this week. It’s not a high end device like the Bionic but you can consider it as an upper mid-range device with some good and satisfying specs. It will most likely feature a Samsung AMOLED display, Android 2.3.4, 5 MP rear camera, 1.3 MP front-facing camera for video chatting and 2GB of storage. Last month we reported that Verizon would be launching the Stratosphere on September 8th, so Pocket-Now’s information about it being released this week seems spot on. All we need now is an official announcement from Big Red to confirm what we probably already know.

The Stratosphere will be around $150 on a 2-yr contract but stay tuned as we should see some official pricing within a few days. Anyone looking forward to the upcoming Samsung Slider from Verizon?