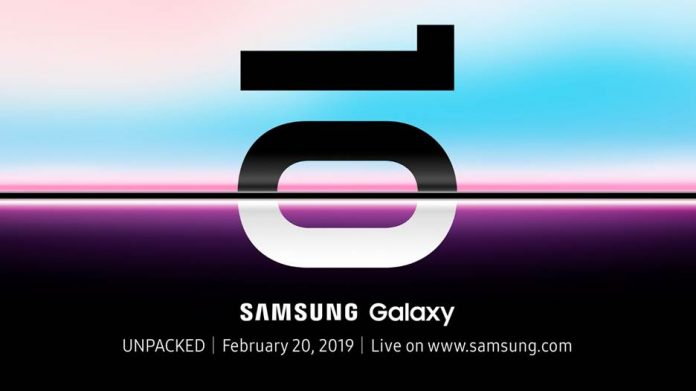 We might be in the midst of CES but that doesn’t mean we can’t look ahead a few weeks. In fact, Samsung has done just that, today confirming it plans to announce the Galaxy S10 in February.

An email is making its rounds this morning, advising that February 20, 2019 will be the data of its next Unpacked event. One look at the invitation tells us it’s related to the Galaxy S10.

There’s very little in the email — we received one — as it essentially provides the time, date, and location. Of course, this is all one really needs to book a reservation and RSVP, right?

The graphic that accompanies the invitation is an interesting one as it shows a “10” on its side and split horizontally. Could this indicate edge-to-edge displays and multiple colors? Sure. It could also suggest two different versions of the phone, something we’ve come to expect. For a few generations now we’ve had the standard Galaxy S and a larger Galaxy S Plus.

Another interesting idea comes in the ongoing reports that Samsung is readying a foldable phone. Rumors have been ramping up over the last few months around a so-called Galaxy X model which purports to have a display that can fold over on itself.

It’s probably not a coincidence that “X” is 10 is Roman numerals. The launch of an X model on the tenth anniversary of the Galaxy S makes sense.

Would Samsung opt to introduce its Galaxy S10 and a Galaxy X phone at the same time? That’s one heck of a gamble as one obviously overshadows the other. The Galaxy S10, for all its practical features and advances, would play second fiddle to the company’s first foldable phone.

We’ve already seen a glimpse of the Galaxy X; Samsung briefly, showed it off from a distance, back in the fall. Perhaps they’ll have it on hand on February 20 and continue to tease it out.

With around six weeks to go until the February Unpacked event we suspect we’ll get more rumors and speculation in short order.