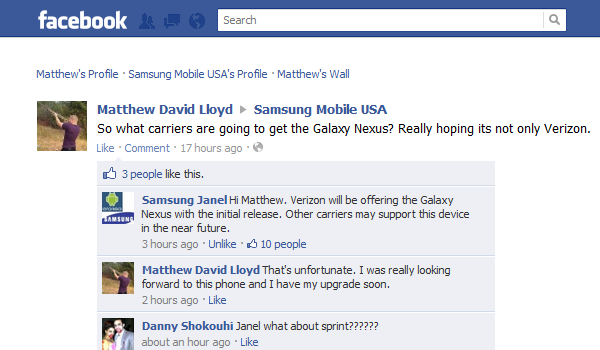 If you’re looking for another sign that Verizon will be offering the Galaxy Nexus in an exclusive deal, then we’ve got what you need.  A post on Samsung Mobile USA’s wall from the wee hours of the morning has been answered somewhat officially by the handset maker.  When asked which other carriers will be supporting the new Android 4.0 device, Samsung Janel replied that Verizon would get first crack and then, possibly, other carriers.  We’ve seen a number of clues that point to a Verizon deal however this just confirms the exclusivity, if only for a short term.

Verizon will be offering the Galaxy Nexus with the initial release. Other carriers may support this device in the near future.

Update: It appears Samsung Janel jumped the gun and has since retracted his statement. The game continues.