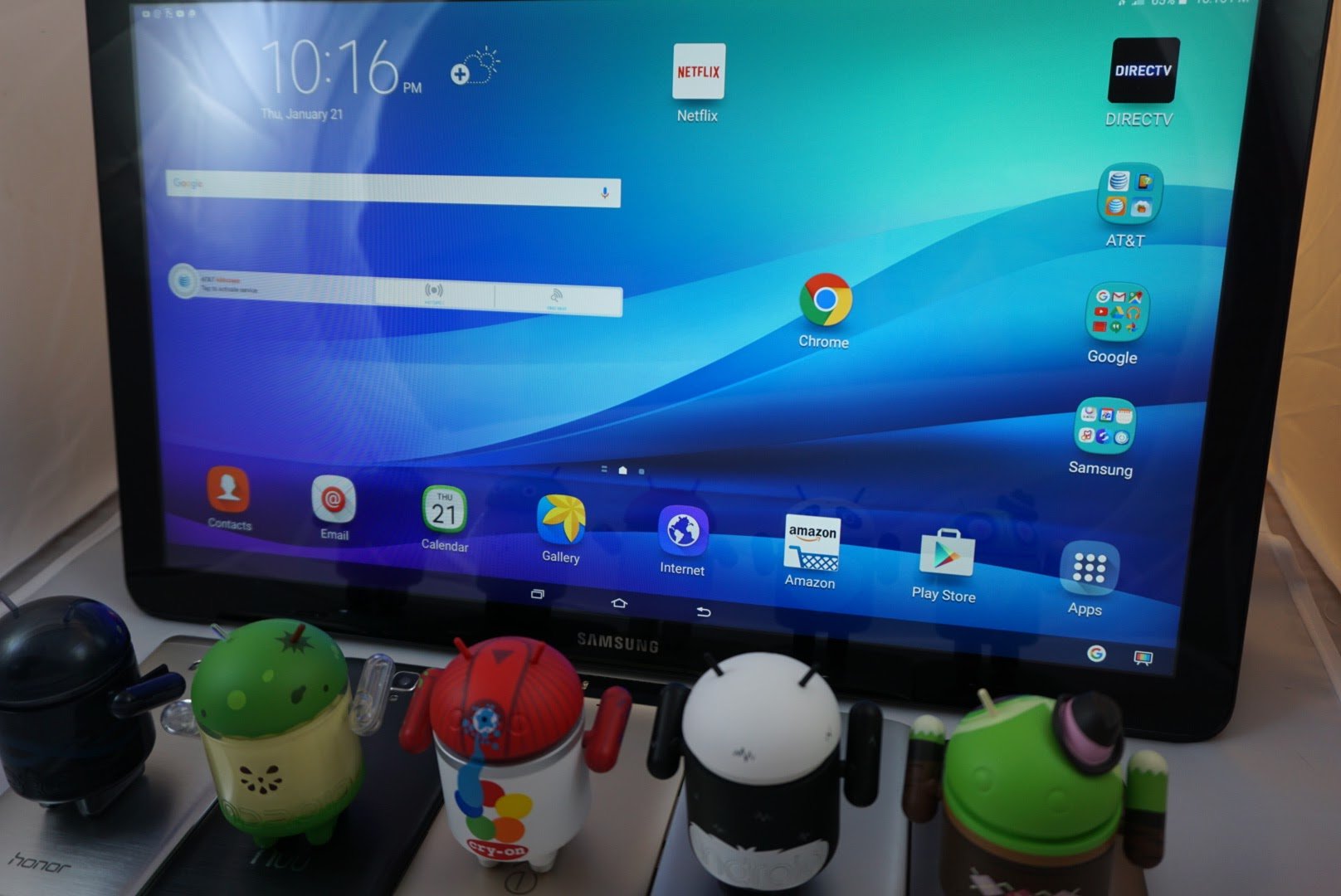 I have a love and hate relationship with Samsung. Samsung is one of the largest tech companies in the world, and even though they drive me absolutely nuts sometimes with the decisions they make as a group, I cannot argue with the positive impact it has on the mobile industry as a whole.

Samsung is not afraid to drop tons of money into Research and Development. Sometimes Samsung makes you wonder what it is thinking, but as a whole they dare to take risks and I admire them for that. Samsung actually puts skin in the game and take risks while many others wait and copy their successful moves. Samsung would rather risk losing than watching others win from the sidelines. And that ability to take risks is the main reason why good old Samsung is so successful.

Apple, the most valuable company in the world, made the decision to completely copy Samsung’s large screened Note line with the iPhone 6 plus. It took three years for Apple to finally realize it was going to lose customers with large smartphones if a change wasn’t made. Most recently, Apple blatantly copied Samsung’s move into the large tablet segment with the ridiculously priced 12.9″ iPad Pro. Samsung was already paving the path for large productivity tablets two years ago with the Galaxy Note 12.2″ Pro tablet. Samsung has defined what Android phones and tablets should be which is why it is the largest manufacturer of mobile devices in the world.

Samsung has recently been dominating in the premium mobile processor market because Qualcomm wasn’t meeting its standards, and has definitely paved a road for high-quality displays in televisions, tablets and smartphones. Other manufacturers of displays have simply given up and even buy Samsung AMOLED displays for their most premium devices.

While I could go on and on about what Samsung does well, it’s time to discuss its latest endeavor – the Samsung Galaxy View. The $549.99 priced Samsung Galaxy View is a massive, first of its kind 18.4″ Android 5.1 Lollipop tablet that is mainly getting negative reviews from other websites. Many people don’t know what to think of the View and are comparing it to a television, which it is not. It’s an Android tablet. There is no definition that states all tablets must fall into the 7-12″ category to be useful, and Samsung understands that better than any other manufacturer.

The View isn’t a television and it doesn’t pretend to be one. It doesn’t have HDMI ports, a weak processor, and basic software. You’re never going to mount the Samsung Galaxy View on your wall.

The tablet segment was made popular by the iPad, but in recent years, consumers have found little use for them and competing Android tablets as well. Tablets aren’t the laptop or PC killers people hoped for, instead they are used for media consumption and basic web browsing. Word processing, video editing, emailing, and other more intensive tasks are much easier from a full on computer and media consumption is best left to tablets.

It’s more common than not to leave your tablet at home, and to use it in bed or while sitting on the couch. Larger smartphones have replaced the need for most tablets, and Samsung is the first manufacturer to make a change.

Let me state that Samsung did not provide me with the Galaxy View to review(although I wish they would), I went out and spent my own hard earned money. 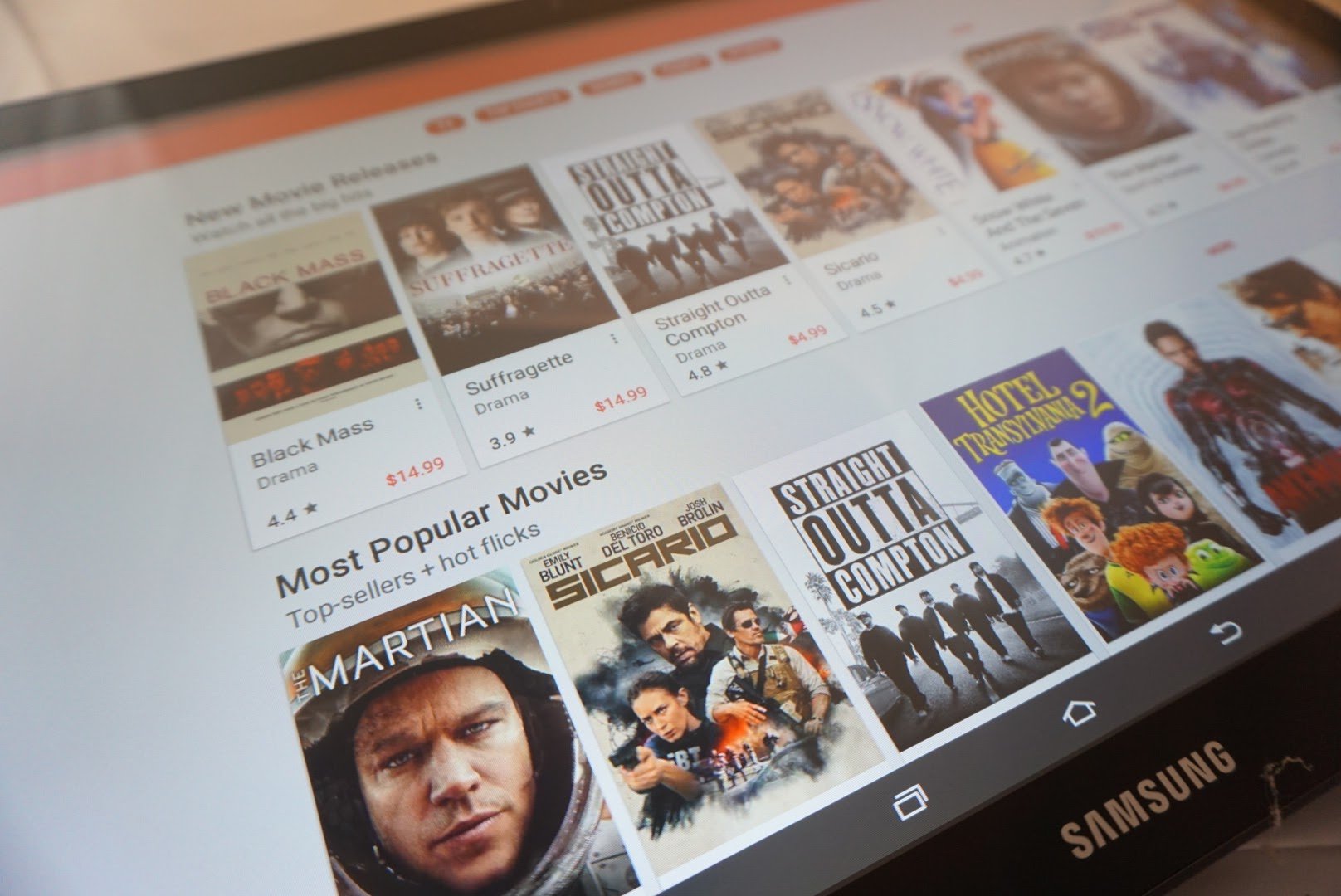 The Samsung Galaxy View is an 18.4″ tablet with a gorgeous 1080p HD display that runs Android 5.1 Lollipop and is powered by a Samsung made Exynos7580 octa-core processor. The base Galaxy View comes with 32GB of internal memory that is expandable via a microSD card so you can load it up with all of the media your heart desires.

It comes in a full plastic housing that doesn’t attract oil or dirt, and it also has a stand that is built into the back that never allows it to lay flat. There is a handle to carry the heavy 5.84lb tablet, but you can tell Samsung did its homework in ergonomics. A tablet of this size wouldn’t be easy to use laying flat, so the stand on the back rotates like a see-saw like motion to allow it to stand upright when watching movies, or allows it to be angled towards your face if using it at a table or in your lap.

The View has a 5700mAh battery to power the massive display, and can play continuous video for over eight hours. With such a large battery, Samsung has included it’s own charger versus the standard microUSB plug. You won’t be taking standard pictures from this tablet as Samsung has not put in a rear camera and that is okay. It would be rather ridiculous to use a 5.84lb tablet as a camera, and if they did include one it may increase the risk of dropping the tablet while holding trying to hold it steady.

It does have a 2.2MP front facing camera for things like video chats.

The Galaxy View also comes in WiFi only models, or it can also have built in LTE if you opt for the AT&T version at $600. The LTE version from AT&T also has 64GB of memory standard so you get more value for the extra $50 over the WiFi only model.

The Samsung Galaxy View brings a new form factor that many will not see the value in just yet – but they will in two years after they have gotten their hands on one from an early adopter. 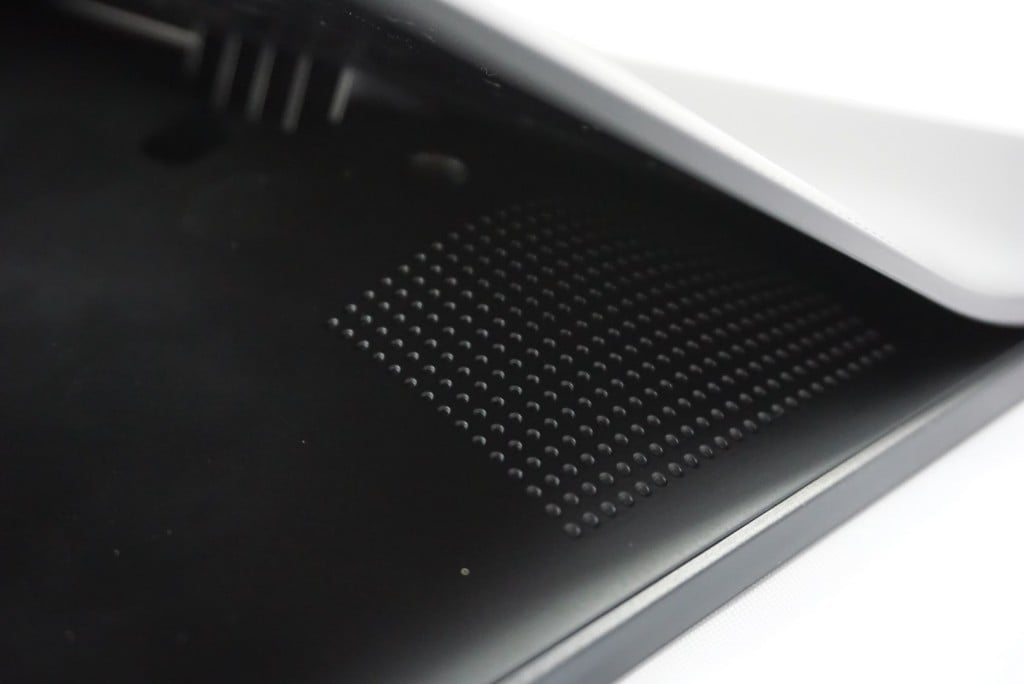 I have a whole host of smartphones, from unlocked and reasonably priced Android smartphones, to the ultra premium smartphones from Huawei, LG, Samsung, and even Apple. I know Apple is in there, but only so I can understand the mobile market and have objective points of view. I also have tablets like the NVIDIA SHIELD, Google Nexus 9, and the Samsung Galaxy Tab S2. For productivity purposes I mostly work from a Lenovo ThinkPad X1 and a Microsoft Surface Pro 3. I Basically, you can say I have a buffet of devices to select from, and what I can tell you is the Samsung Galaxy View has a purpose and a good one at that.

When I have actual work or writing to do, I’ll stick to my Windows laptop. For media consumption I mainly use my larger smartphones. The NVIDIA SHIELD and Nexus 9 are both great devices, but they end up sitting on my desk more than I actually use them. The minimal increase in size over my large smartphones doesn’t justify a purpose for me and I think many people feel the same. It’s why I believe the tablet market has been failing. Large smartphones have replaced the need for tablets.

When smartphones had 3.5-4″ displays, tablets that were over double in size definitely made it easier to read and watch movies. Now with most smartphones in the 5.5-5.7″ category, tablets are put to the wayside when the displays are only one or two inches bigger.

With the Samsung Galaxy View I finally have a tablet that I enjoy using at home. I find myself browsing the web, watching movies and YouTube Videos through it, looking through my photos, and definitely listening to music through the dual rear facing speakers. While I have read complaints that the speakers shouldn’t be on the back, I don’t understand the complaint. The speakers are angled outward and reflect off the stand in the back which redirects the music to the front. It also allows for the sound to become fuller and the speakers are much larger than any others found in tablets.

The sound is actually good enough to replace portable speakers, and is definitely loud enough to hear clearly while I take a shower. it’s also loud enough to make me wonder if my neighbors can hear it through my walls. It’s so much easier to consume media through the Samsung Galaxy View and for that I love it. I don’t care if it runs pure Android or not – it runs Android Lollipop which is stable and the battery life easily gets me through a couple days of usage. The included charger also recharges the battery rather quickly.

Using the Galaxy View is nothing but a smooth experience. There are no hiccups which is what everyone should want in a device. 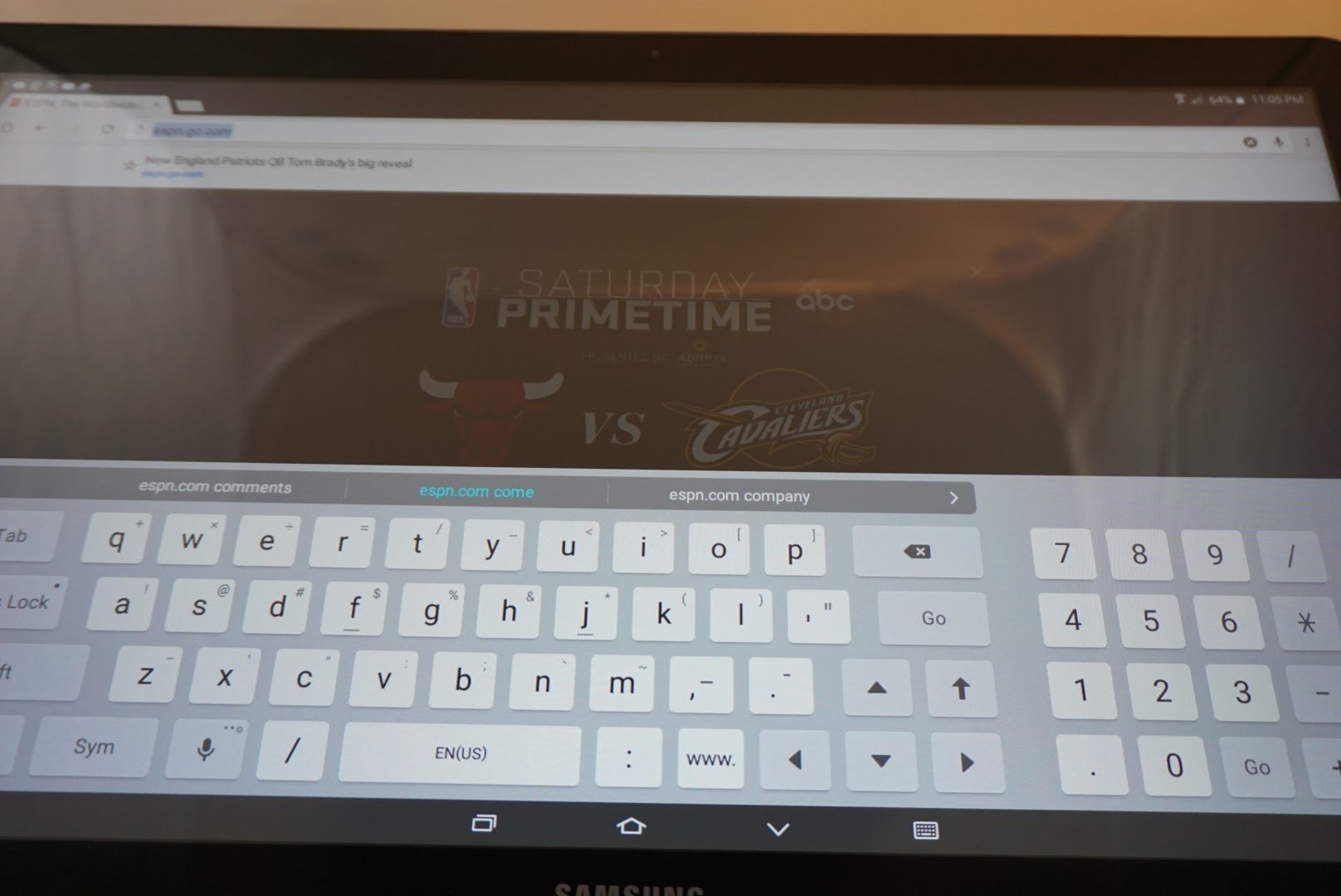 I don’t plan on taking this massive tablet with me everywhere I go but I never bring a tablet with me anyways. If I am traveling I will always bring my laptop and my smartphone. When I am out of the house, I can watch videos from my smartphone if I really want to. But when I am home I really want to enjoy my media and the Samsung Galaxy View delivers in every single way. 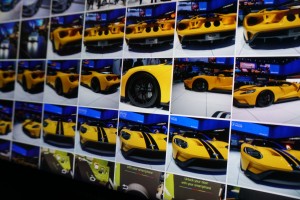 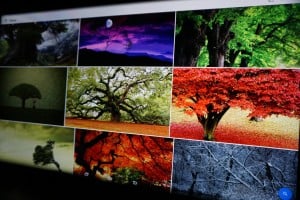 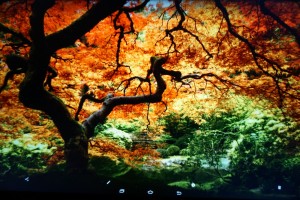 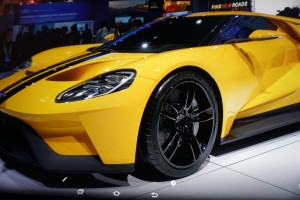 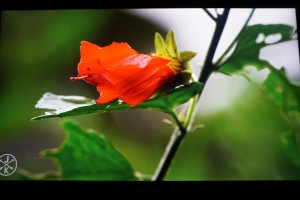 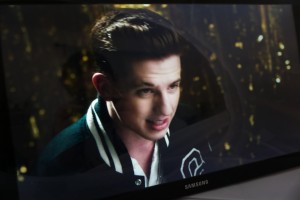 The 18.4″ Samsung Galaxy View isn’t cheap starting at $549.99 from Amazon.com. Arguably no tablet is cheap at any price since they are typically a “nice to have” on top of owning a smartphone. But for such a massive display, an octa-core processor and full HD 1080p display, $549.99 is a very reasonable price to pay especially when you compare it to the Apple iPad Pro which starts at a wallet busting $799 for just a 12.9″ display.

The Samsung Galaxy View is a product of a company who isn’t afraid to take chances, and the engineers at Samsung have succeeded again in redefining a failing market segment. While Samsung may drive me nuts sometimes, they have reminded me of why I love the things they do with the Samsung Galaxy View.

Samsung didn’t wait to copy another manufacturer, instead it created a tablet that many are sure to love. Samsung doesn’t pretend to make you think the View should be portable – it already has an entire lineup of tablets you can bring on the road. The Samsung Galaxy View is a media consumption tablet that you will appreciate if you understand how most tablets are used.

Samsung should take pride in the fact that it is leading the path for all other manufacturers to follow. It has just kicked life back into the tablet segment with the beast of a tablet – The Samsung Galaxy View. Remember this tablet as it is the first in many more large tablets to come in the future and remind yourself that Samsung is a true leader when it comes to innovation.

Check out the Samsung Galaxy View at Samsung.com. 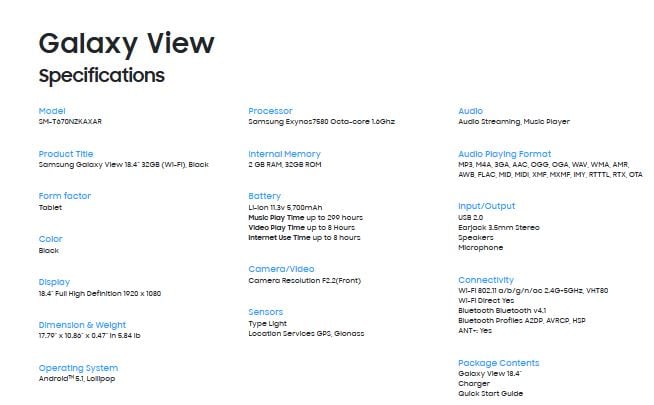 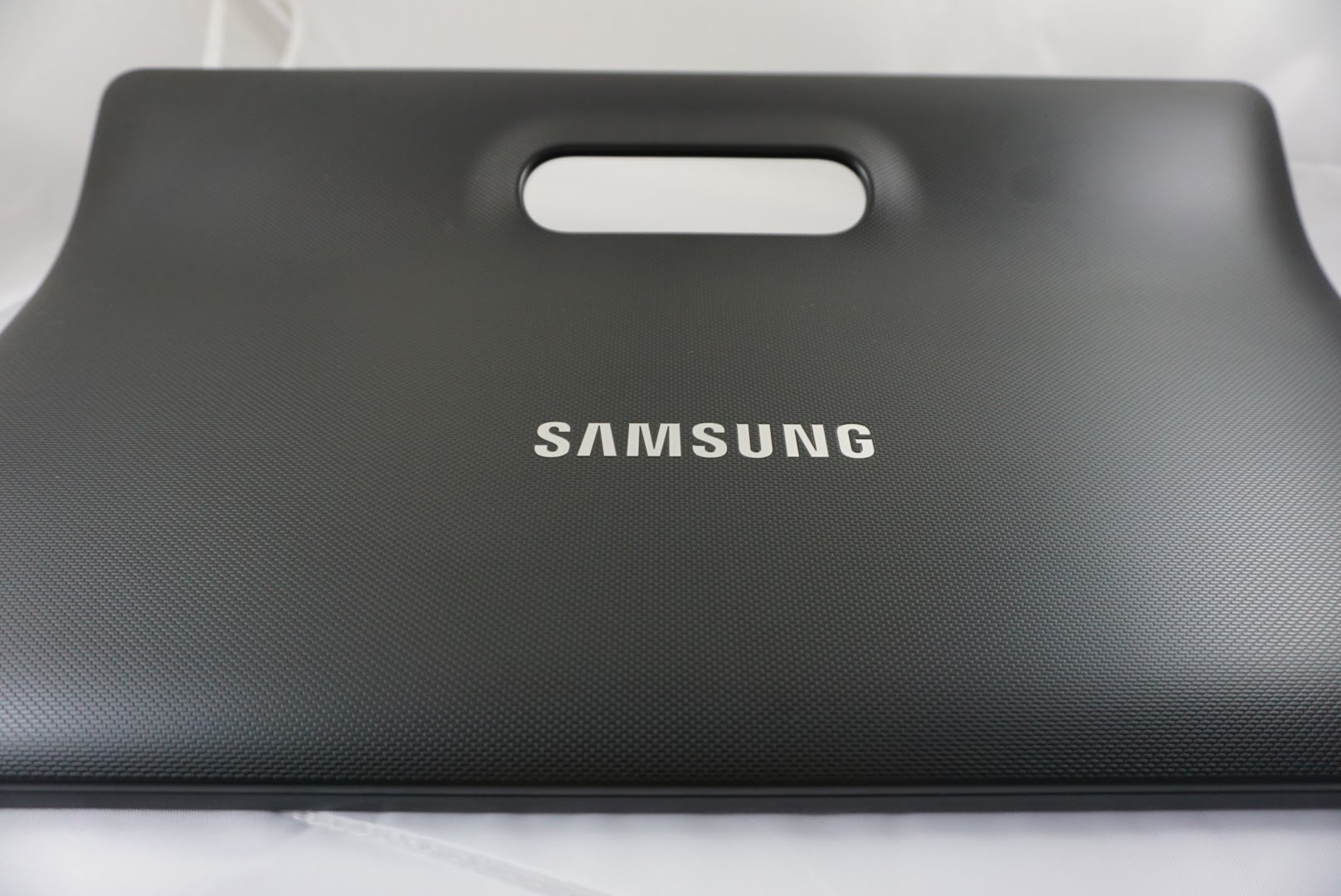 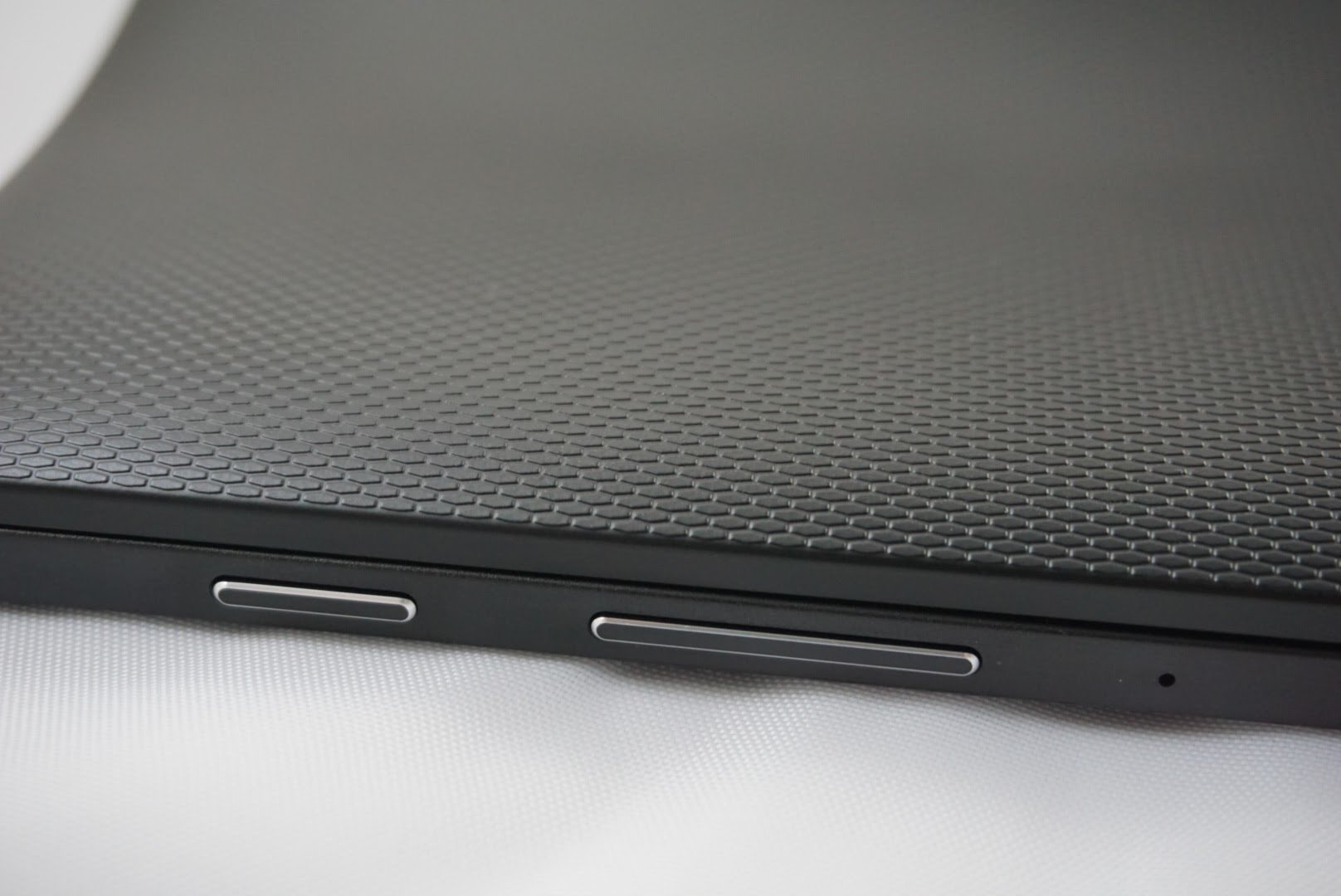 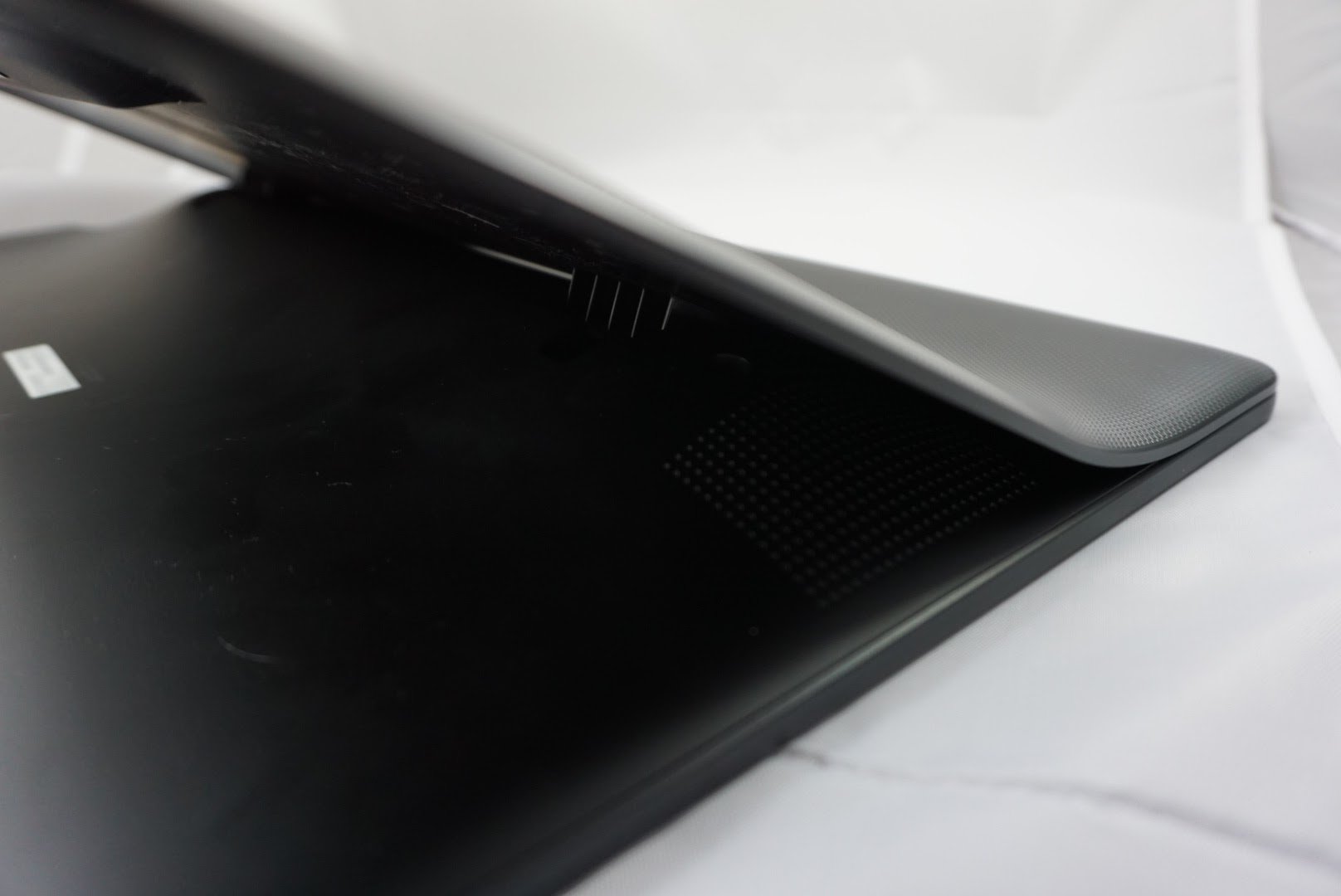 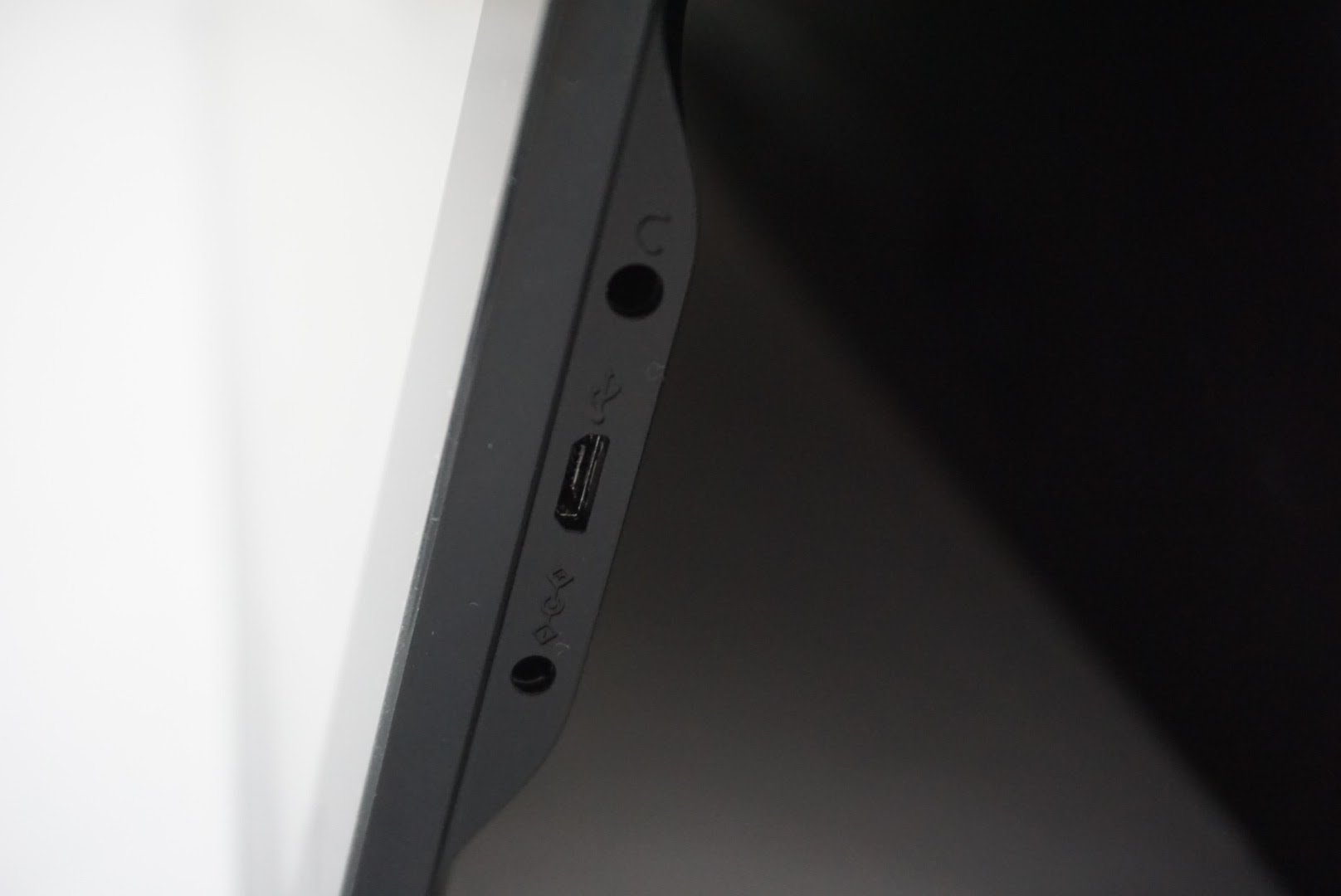 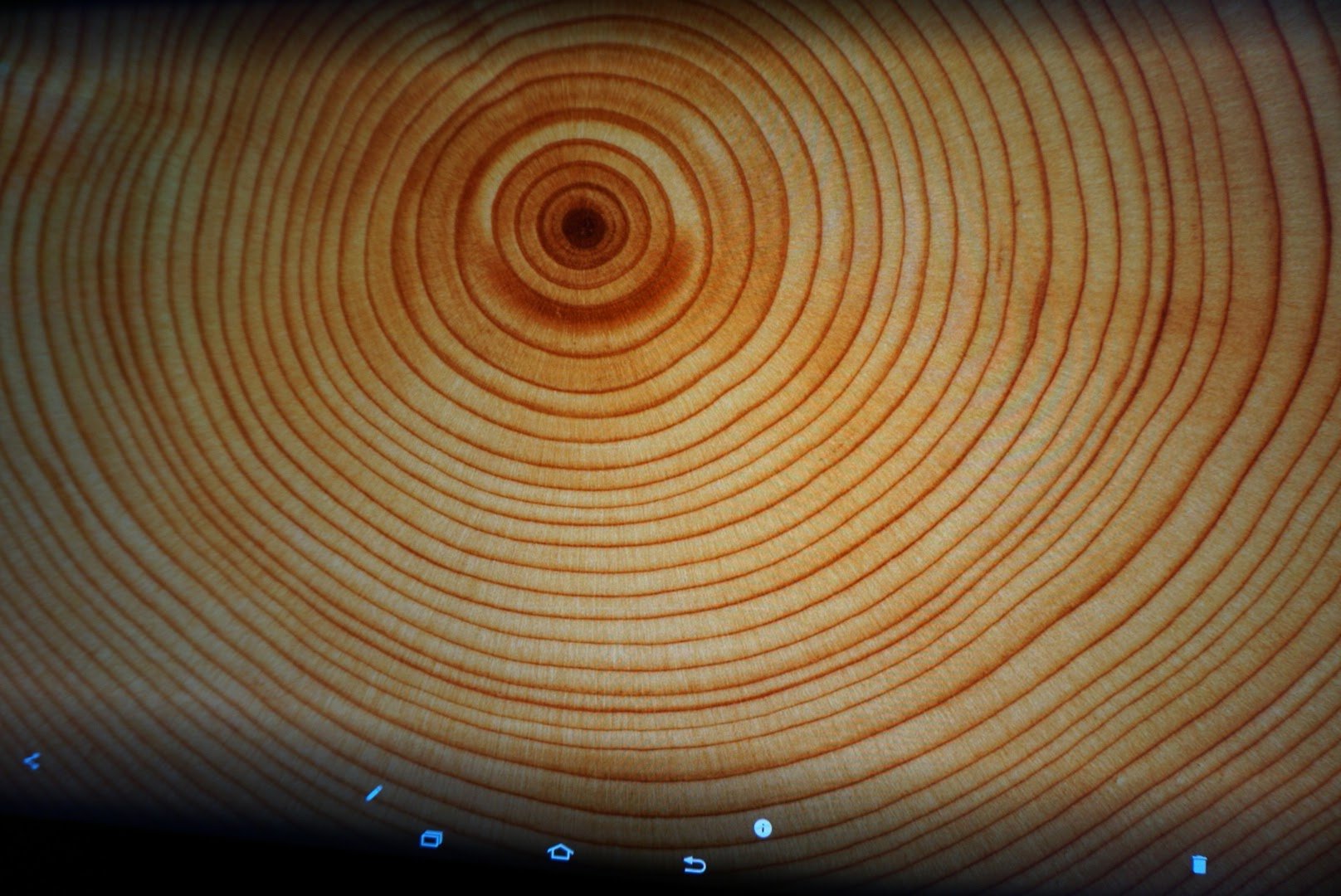 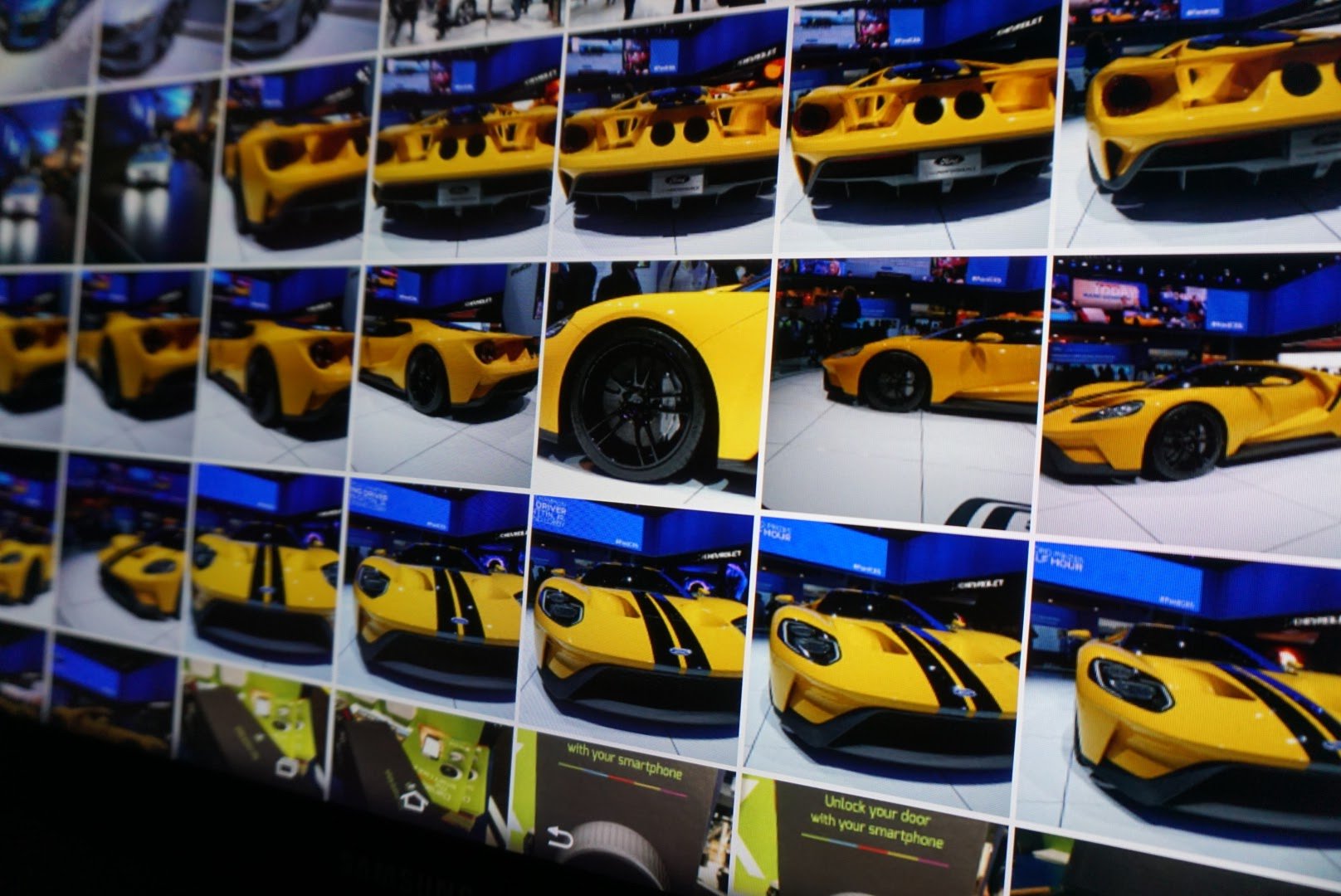 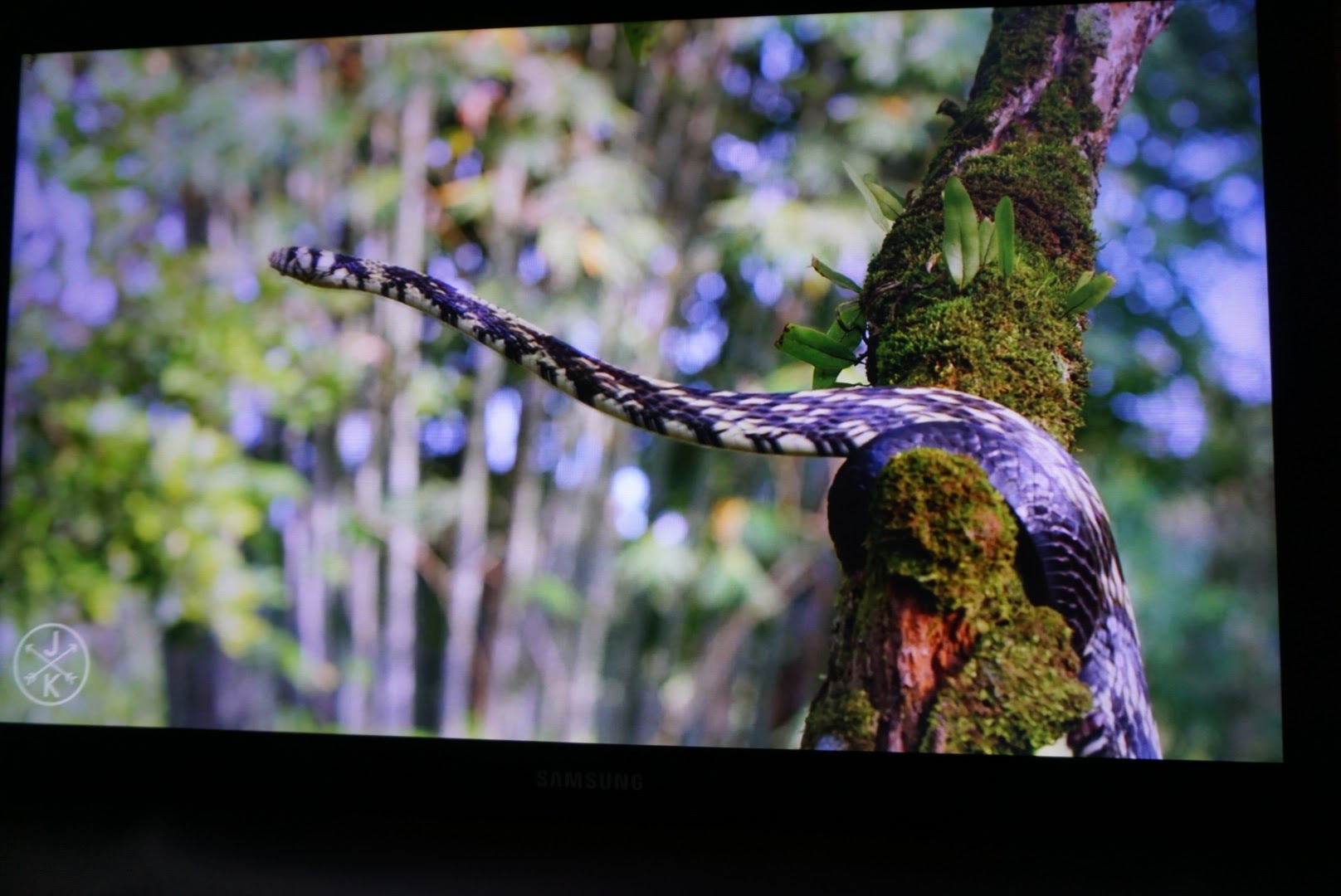