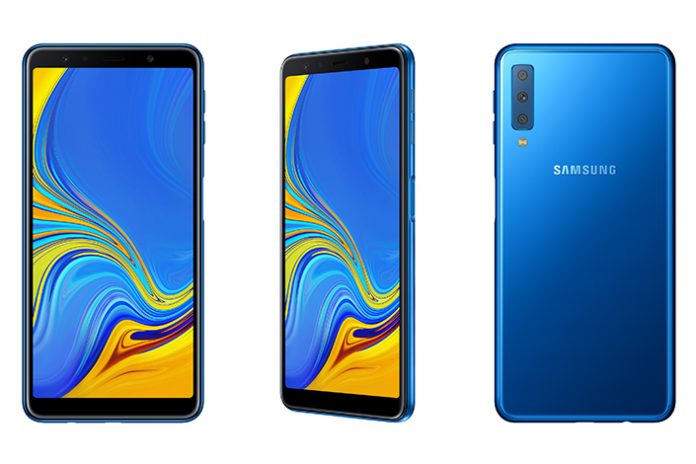 Samsung is hosting “A Galaxy” event on October 11 and one of the devices rumored to arrive on that date was the next-gen Galaxy A7. Well, it seems that won’t be the case, as Samsung just introduced the phone via a press release.

What makes the new handset interesting is that it’s the first in Samsung’s portfolio to feature a tri-camera setup on the back. It’s also a middle-ranger, so it shouldn’t cost you an arm and a leg like the Huawei P20 Pro. Although knowing Samsung’s price schemes for its mid-range offerings it won’t be super affordable either.

The Galaxy A7 is a mid-ranger packed with premium features

Anyway, first thing’s first. Let’s take a quick look at the new phone’s design and specs. The Galaxy A7 features a glass body and has the fingerprint scanner living on the side. In an era where phone’s are getting larger, the A7 boasts a large 6-inch InfinityDisplay with 1080 x 2220 resolution and Samsung’s now signature 18:5:9 aspect ratio. 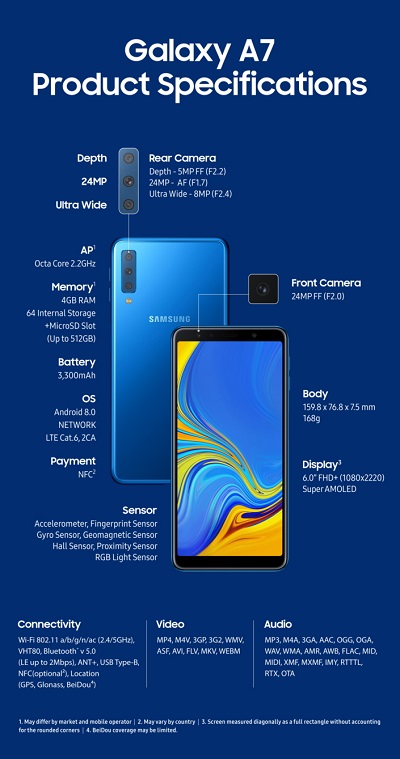 The company will be offering the Galaxy A7 up with either an octa-core Snapdragon or an Exynos chip, depending on the market.

The phone will ship in three configurations, as follows:

Because the Galaxy A7 is the first mid-range to come with a tri-camera setup. Speaking of which, the arrangement consist of a 24MP+8MP+5MP combination. The main sensor boasts pixel-binning technology, which is used to combine info gathered by for pixels for finer details. This is similar to what Huawei is doing on the P20 Pro. Although Samsung is using this system to improve low-light shots.

As for the 8MP sensor, it offers f/2.4 aperture and is an ultra-wide, 120-degree lens. While the 5MP one brings f/2.2 and is a depth sensor for portrait photos. On the front, Samsung has outfitted the phone with a 24-megapixel (f/2.0) selfie snapper. Samsung has also thrown in some special camera tricks, like being able to adjust bokeh effect strength as you take a picture.

The Samsung Galaxy A7 will be available in four colors including Black, Gold, Pink and Blue and will initially go on sale in Europe and Asia this fall. The smartphone will eventually roll out to other markets, which hopefully means the US too. Samsung hasn’t said anything about pricing yet, but maybe we’ll get more details during the October 11 event?

All the major smartphone releases we can expect in October