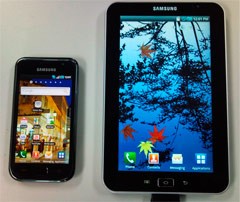 We have known for a while that Samsung’s 7-inch Android-based tablet (supposedly known as the Galaxy Tab) would be rolling out sometime in the third quarter of 2010.  Now, thanks to the team over at Engadget, we now know when it’ll be making its official debut. According to a “high-ranking official” at Samsung, the device will be officially unveiled at IFA on September 3rd in Berlin. Other than that, all we know is the device will be running Android 2.2, a 1.2GHz Cortex A8 processor, 16GB of on-board memory, and both WiFi and 3G connectivity. Stay tuned for more on this in the coming weeks. I hope there will be some leaks (if this report is indeed true.)

Is anyone else looking forward to this thing? I want this device so bad.  I also can’t wait to see how Android apps look and perform on a device of this caliber. Let us know your thoughts below!