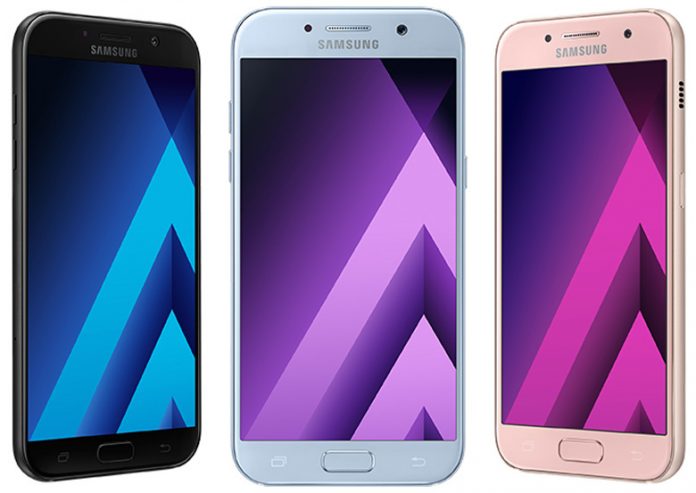 The mid-range smartphone sector has been getting quite interesting as of late and Samsung’s newest smartphones unveiled ahead of CES 2017 are a testimony of this growing trend.

Introducing the new Samsung Galaxy A lineup which features three models, the Galaxy A7, Galaxy A5 and Galaxy A3 – all IP68 certified for water and dust resistance. There are a few things all variants have in common like sporting sleek metal bodies that are 7.9mm thick and USB Type-C ports.

Interestingly, all three phones take advantage of a feature the Galaxy Note7 used to benefit from and that is Secure Folder. The option allowed users to easily and safely tuck away sensitive info in a folder.

They also run Android 6.0 Marshmallow out of the box (sadly) and offer support for Samsung Pay (thumbs up to that). Let’s see what they each offer in terms of specs.

This is the top of the line model which arrives with a 5.7-inch Super AMOLED display with 1920 x 1080 pixel resolution. Samsung uses its own chipset crop to fuel the new Galaxy A (2017) family, so the Galaxy A7 draws power from an octa-core Exynos chipset clocked at 1.9GHz combined with 3GB of RAM and 32GB of internal storage (microSD card slot allows for memory expansion up to 256GB).

The photography department is where things get even more exciting. Just like the OnePlus 3T, the Galaxy A7 (2017) features a 16MP/16MP camera combo, so the phone should snap some great selfies.

The phone runs on a 3,600 mAh battery and will be sold in Black, Blue, Pink and Gold.

The Galaxy A5 is a tad smaller boasting a 5.2-inch display wth the same 1920 x 1080 pixel resolution. It takes advantage of the powers of the Exynos 7880 clocked at 1.9GHz in combination with 3GB of RAM and 32GB of storage (microSD card slot is again present).

Like in the case of the Galaxy A7, there’s two 16MP cameras onboard, but a smaller 3,000 mAh battery keeps the lights on. Customers can grab the A5 in Black, Blue, Pink or Gold.

Last but not least is the Galaxy A3 which comes forth with a 4.7-inch display with 1280 x 720 pixel resolution. The CPU is still an Exynos but this time clocked at only 1.6GHz. Cameras aren’t as advanced as on the A7 and A5, so we have a 13MP main snapper and 8MP selfie shooter – both with f/1.9 apertures (just like the A7).

Other specs include 2GB of RAM, 16GB of internal storage (microSD card available) and a 2,350 mAh battery.

Samsung hasn’t specified anything in terms of pricing. It did say the trio will go on sale in Russia in early January with more markets to be added soon.

However, if leaks are to be believed, the Galaxy A3 will sell for approximately $342, while the A5 will bear a $446 price-tag in Europe. We don’t know the price for the A7 yet, but we expect it to hit the $500 threshold. Samsung’s new mid-rangers are definitely not super affordable. What do you think?