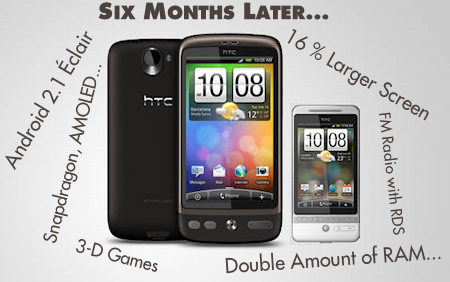 The following is an opinion piece from one of our readers, Lars Aronsson.

That things progress very quickly in the world of mobile technology is no secret: there’s always something bigger, better, faster and more powerful around the corner. In the last 15 years, cell-phones have gone from being a rather exclusive gadget, to a necessity of modern living that you wouldn’t leave home without. Since smartphones can do so much, and they keep getting a wider range of uses, it’s sometimes easy to get gadget envy and crave that last superphone that just came out.

As you all may know, the grass is often greener on the other side, and I for one can get so intrigued by a new handset that I just got to have it – even though the one that’s in my pocket right now is more than adequate and only a couple of months old. How fast things move forward on the smartphone scene perhaps became more apparent than ever with the recent launch of the Android device HTC Desire at MWC in Barcelona. HTC’s latest Android beast is basically another version of the Nexus One, with a few improvements.

I bought the HTC Hero unlocked in late September last year when it was fairly new, for the equivalent of $625. In a couple of weeks, the HTC Desire will start selling in Europe.  I can soon get a phone with a more state of the art version of my favorite mobile OS, a 16% larger screen with 2.5 times higher resolution, an improved and more advanced display technology, an almost twice as fast processor and the double amount of RAM. On top of that, for good measures, I’d get a stereo FM radio with RDS as well, only six months after buying the HTC Hero. And I would get all this for the same amount as the Hero back in September. That’s quick progress.  If Apple only had been able to match this impressive rate of development, I just might have had an interest for the technologically inferior iPhone.

I would lie if I didn’t say I desired the Desire, and I did consider buying it for a while. Even though I have more important things to spend my money on, like food and shelter (it all depends on how you prioritize, of course – true phone fanatics may beg to differ). But then I thought; do I actually need a new device? What’s wrong with the Hero? Sure, it would be really nice to browse the web and watch pictures and movies on that huge and vivid AMOLED display. I could play games with great hardware accelerated 3-D graphics; the entire system would be a lot faster with that Snapdragon CPU and multi-tasking would be smoother thanks to the massive amount of RAM. I could enjoy all this longer without recharging as well, since both the processor and the display have power saving features. But do I really need all this? No. The Hero can do most of what the Desire can (especially when the Éclair update arrives), albeit on a smaller scale.

It’s a bit nuts, but I have bought three new devices in less than a year – two of them in the high-end. For each new handset, I’ve thought: this is the last phone I’m going to need for a very long time. But then something new and exciting pops-up that totally geeks me out. However, I think I finally have moved beyond yearning for the greener Google on the other side of the digital river. I’d say it’s time to, in the spirit of John Lennon, start living in the moment and enjoy what I have here today, instead of always wanting something more (at least when it comes to gadgets, one step at a time).

Voices have been raised against Google and affiliates for pushing out new and better products too frequently: the Motorola Droid was released in early November 2009, soon thereafter the Nexus One arrived and now the HTC Desire is the current Android pièce de résistance. I fail to see why this is a bad thing. When you buy a new gadget, no matter when, it’s bound to soon be upstaged by a more advanced one, anyway. It’s always been like that.

I do understand why some people can get a bit stressed about the frequent upgrades, though. It’s hard enough just to keep up with all the new releases, let alone actually having the latest and greatest device out there. Doing so will probably just give you an ulcer and a hole in your wallet.

Instead, I think one ought to applaud the ingenuity that keep pushing technology forward, enjoy the device you have, and rest assured that when you eventually feel it’s time to upgrade – total awesomeness will be there waiting for you. I think yearly or even biyearly upgrades generally are sensible choices – and the longer you wait, the more you’ll get.

Do you recognize yourself in my battle against spending way too much money on gadgets? Does it all depend on how big a phone nerd you are? How often do you upgrade to a new device? My biggest challenge will probably be to resist the rumored Enterprise version of the Nexus One (if it ever comes out), sporting a hardware QWERTY keyboard. I quiver already…

I am determined to not buy a new device for all 2010, and if I’m truly good at my new philosophical, Zen-like approach to technological advances, I will not even want to buy one either. Will I succeed? Only time will tell.