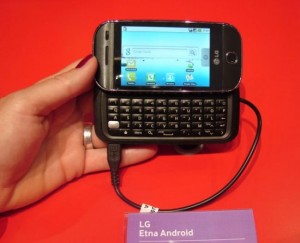 This weekend saw the unearthing of another LG handset.Â  Called ‘Etna’, the 5-row slider QWERTY was spotted at a Vodafone booth at the IFA trade fair.Â  There are only a handful of specs to share so far, but here’s what we know:

Based on the picture above, it appears to run the stock Android OS with only a few slight tweaks.Â  We’ll be sure to bring you the meat and potatoes stuff as we get it!

Given what you see and know, what do you think of the Etna?

Protect your small valuable items in the Otterbox Drybox this summer. Keep your phone and other gear safe from water, sand, and more.
Read more
News and Rumors

If you're a fan of puzzles and time wasters, you've probably spent time with a Rubik's Cube...
Read more