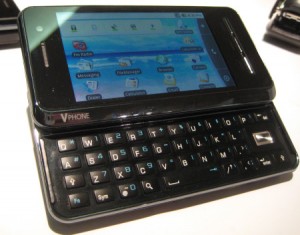 Maybe you’re not into big name handset makers like HTC or Motorola.Â  Maybe you’re into random, obscure companies who spring up from out of nowhere.Â  If that’s the case, Saygus might be the one for you.Â  After getting tipped as the 3rd Verizon handset to run Android earlier this week, curiosityÂ  is being piqued everywhere.Â  What does the phone look like?Â  How does it feel?Â  Is it even real?

Gearlog was able to spend a few minutes playing with one last night at a pre-CES show held in Manhattan. The device they played with was “fairly prototypey” and had Android 1.6 as the platform. They’re (and we’re) expecting it to be running 2.0 when it arrives in 2010.

As Gearlog points out, Saygus appears focused on video-conferencing capabilities, which isn’t really something anyone is prepared to handle in large capacity. If anyone can, we’d assume it’s Verizon. The VPhone has decent enough specs to at least warrant a look – 512MB RAM, 5 mega-pixel camera with flash, and a 3.5-inch WVGA touchscreen.