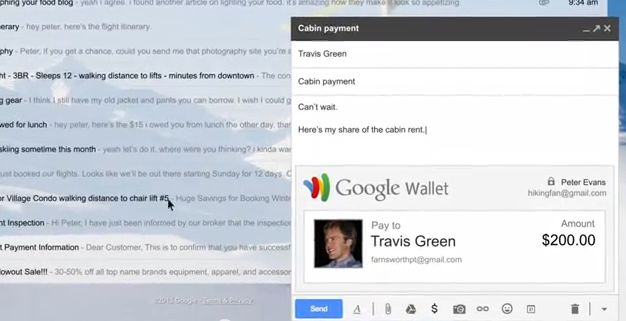 Over at the Google Commerce Blog, there’s a new option being shown off, and it’s pretty cool. Google has added the ability for users to send money via Gmail and Google Wallet to other users, as well as to receive payments in the same manner. The option is going to be incorporated into Gmail the same way you attach anything else – you’ll see a money icon, and you can then send money, free of charge, as long as you have a bank account connected to your Google Wallet. Even cooler? The recipient doesn’t even have to be using a Gmail address. There will be a small transaction fee if the money is sent by an attached credit or debit card, however, and the fees will be clearly noted to users. Check out the video below:

You’ll be able to do this over the coming months as the ability rolls out to Gmail users for U.S. residents over 18. The option won’t be available on mobile via the official Gmail app, but will be able to be done via the Google Wallet mobile site.

What are your thoughts? Tell us in the comments below!