Welcome back to AndroidGuys’ new series, Share With the Class!  To kick things off, we asked you what your favorite productivity apps were.

Some of you mentioned titles like Gmote, SwiFTP Server, Astrid, and ListBuddy.  It was interesting to hear how people use many different apps in many different days.  This time around we wanted to know what free apps you would be willing to pay for.

Here’s what some of you had to say:

I have more than 500 contacts.  Scrolling through them is much easier with Dialer One. T9 functionality makes it simple while driving.  The author updates the app several times a week, based on user requests.  You can start the app by long press on search button.  It supports many languages in the phone book; all my contacts are in Cyrillic.  Developed by the same author who made aContacts, also a popular dialer for Android. – Arseniy Finberg

Wireless tether (for root users) is dead simple to use. A lot easier to use than any of the Blackberry or Nokia solutions. It should have come pre-installed on the phone in the first place.  Its something that I use every single day on my phone. It eliminates the need for me to have a separate SIM card in my netbook and thus a second plan/account. This app focuses on doing one thing and does it very well.  – Brandon Roberts

I’d definitely be willing to throw a few dollars to the developer of Linda File Manager.  It’s a free ad-supported file manager that is fast, solid, and not system intensive.  Fills a huge 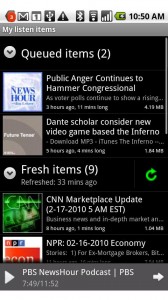 void, without the large footprint of other file managers.  It’s got ads, which can always be annoying, but it’s performance more than makes up for that.  I’d gladly pay for an ad-free version. – Justin Jelinek

I like listening to podcasts. The thing is I hate to sit and wait (mainly forget) to update them before I leave in the morning. Now with Google Listen it doesn’t matter if I forget because all my favorite podcasts are accessible on my Android phone. All I have to do is hit “my listen items” and the cure to bad radio is anywhere I go. – Adam Marquart

The free app I would pay for is last.fm. It’s a nice front end to the online radio of the same name. You get a nice widget to play your recommended radio from. You also get a full app to change stations, add new artists and listen to music. The app also adds any artists played on your device to your library. – James Pearce

I think the best thing that smart phones are capable of doing is catching radio streams.  The best I found for Android is A Online Radio.  Even though the station selections are a bit limited compared to the big guys (AOL, Yahoo) I have lucked out and found about six of my local stations that I listen to.  Being able to tune in radio stations where you get bad FM reception has prevented many a boring workday.

This is the reason why I think I would easily pay about the $5.99 range for a multi-channel stream app or 99¢ for individual stations.  Along with some of your local stations A Online Radio also supports Shoutcast and Icecast streams, so if you are handy enough you can create you own station to stream your mp3 collection.  – Brian H. Harris

I have two apps that are free that I would definitely pay for. The first is Twicca. I’ve tried just about every Twitter client there is for Android and I just keep coming back to this one. The interface is simple, the app is fast, and I love that a huge list of options for each tweet are just a tap away. My second app is Astro File Manager. I don’t know what I would do without a file manager for any device with a file system. That’s definitely worth paying for. – Jason Crabtree

So now it’s time to hear what free apps you are using that you might consider paying for.  Is it one of the above?  Why do you like it so much?  Come on, share with the class!

Why a Chromebook still cannot replace my Windows laptop