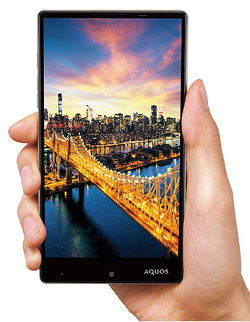 After shaking up the tech industry last year with the first almost bezel less (except at the bottom) phone, Sharp, the Japanese phone manufacturer, is already set to bring the next phone into its portfolio. Sharp just announced the Aquos Xx, a phone with no bezels on three of its sides. 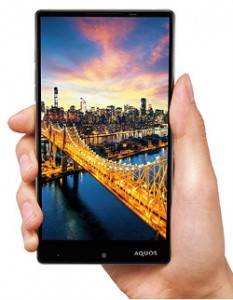 The phone with looks amazing and boasts a pretty high end specifications to compete with the top-tier smartphones. The Sharp Aquos Xx packs a full-hd (1080*1920) 5.7 inch LTPS screen resulting in screen density of 386ppi. The LTPS screen panels are highly vivid and has great outdoor visibility.

Performance wise the phone packs Qualcomm’s tru-octa core 64-bit Snapdragon 810, 3GB of RAM, Adreno 430 GPU which will be more than sufficient enough to handle all the high graphics game available in the market, and 32GB of on-board storage with the option to expand via micro-SD card . The battery is 3200 mAh  non-removable and should provide plenty of on-screen time.

To make it even more compelling, Sharp has also put a lot of extra features in its new Aquos Xx.  The phone is water and dust resistant (IP57-certified), and packs DTS-sound certified speakers. Sharp Aquos Xx is said to be running stock version of Android Lollipop 5.0 . I

The Sharp Aquos Xx is set to release on Japan’s Softbank. For now there is no word on pricing and release date.