I am still laughing at 3D. 3D home theatre TV’s are just kind of hilarious to me, and every time it gets looked at seriously I have to walk away. I would never EVER sit in front of my tv wi 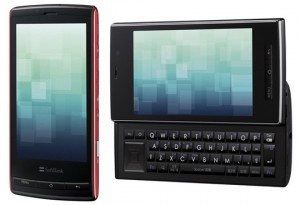 th those glasses on to watch TV. For starters I never JUST watch TV, I am always doing something else. Nintendo got the right idea with their upcoming DS3D which will not require glasses. Give me some of that, I can handle that. Sharp, it seems, agrees with me, but also thinks that more devices should be 3D. With this notion, they have announced a pair of 3D Android phones.

While some 3D movies and Software SHOULD be coming out at launch to support it, the 3D will likely only be involved in Sharp’s custom UI, the screenshots we’ve seen so far do not indicate that 3D will go any further than their software. At the moment, it’s new, which is awesome.The phones that are on their way are:

The 003SH is “simple” Android 2.2 3G Smartphone featuring a 3.8” multi-touch screen with a WVGA resolution (800×480) and featuring Sharp Mobile ASV display technology, as well as Sharp 3D Glassless technology!
The 003SH comes with a 9.60Mpix CCD camera with AF, a 1Ghz Snapdragon CPU, 400MB of internal memory, Wi-Fi, GPS and the possibility to record 720p videos.

The 003SH will be available in three different stock colors including the Red, Black and White and a 10 other “limited” ones sold for the launch of this model.

Whether or not 3D will fully take over all of our screens, I don’t know. In my home, I’m still unconvinced, and on my phone it seems like since it can be disabled, so it will be fun to play with. In the mean time, slide those glasses back on and go catch up on Dexter!