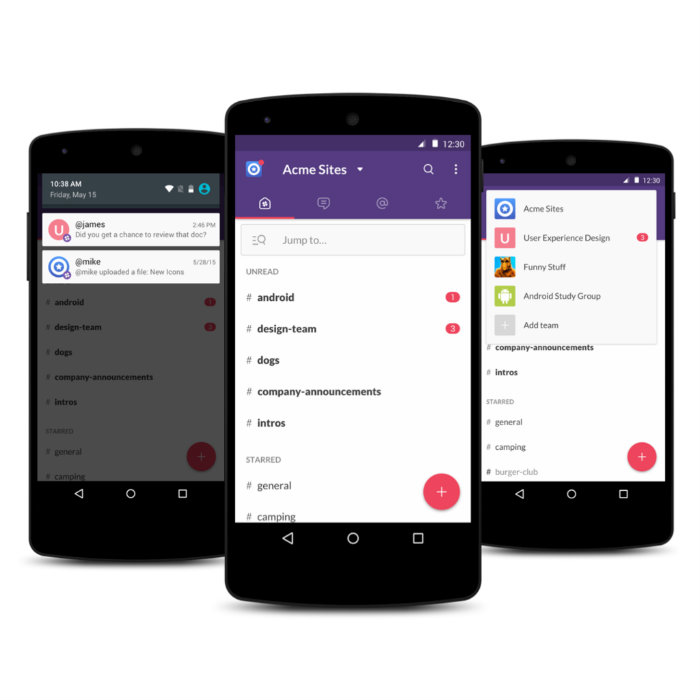 Today, the popular team communication service, Slack, was updated to 2.0. The new update brings the Material Design UI to the masses, and also improves upon a whole boat-load of other smaller details that were frustrating when using the previous versions. For those who aren’t familiar with Slack, you should be. Well, if you do any online team work, that is.

Slack is THE go-to team communication service available today, and has been making quite a splash since it hit the scene last year. Being a part of a few different websites, we all use the Slack, which makes it nice for a one-stop shop for communications between the different teams. Slack also allows for many different integrations such as IFTTT and you can set up something of an in-app RSS feed thanks to the powers that Slack seems to hold within.

The Slack application was in dire need of a solid redesign. Not to say the previous version wasn’t a joy to use, but after poking around the 2.0 update, there was clearly a lot of differences that were found other than just UI changes. Of course, as I mentioned above, the biggest change is the redesign to follow the Material Design UI guidelines.

If you’re looking for the “official” change-log for Slack 2.0, here ya go:

Previously, Slack’s UI was based off of the slide-out drawers found on either the right hand, or left hand sides. This has been removed, and instead, you have a tabbed navigation layout. Once you’ve started Slack up, you will see a drop-down menu that allows you to switch between teams, or add a new team if need be. There is also a search button that you can use to search either specific messages or for specific files, which can come in really handy.

The ever-familiar overflow menu lets you access the remaining settings for the application. From this Settings panel, you have the ability to change your profile image, status, and general account info, specific to yourself. Also, you can set up which notifications you want to be pushed to your device, as well as toggle whether you want your device to Vibrate if a notification comes through.

As a side note, it must be mentioned about how much Slack lets you customize the notifications that come to your device. Especially if one of the teams that you are logged into, has a million different channels for different reasons. You don’t want your phone going off every, single, time something gets posted to a channel. Or you could just be like me, and have all the notifications and get irritated but don’t do anything to change it.

Now back to the Slack update. I stated that the new version features a tabbed design, compared to the slide-out drawers. As for those four tabs, you have your “Home”, “Messages”, “Mentions”, and “Starred”. The Home tab allows you to view both the read and unread channels, private and public, that can be found within whatever team you are a part of. Messages allows you to browse through your team-mates, find the person you need to send a PM to, and get typing away.

At the top of the Home and Messages tabs, there is a “Jump To” bar that allows you to quickly select between contacts or channels without having to scroll. Pretty much like a search function for those two tabbed sections.

Mentions shows you every time you were mentioned so that you can pin-point and catch up, if you’re part of a large group. Finally, the Starred section shows every message that you have every starred, which can help if you need to remember something, or if you just want to have quick-access to a gif.

When you’re on the main page of Slack, there is a Floating Action Button which when pressed, opens more options for you to act upon. You can quickly view all the channels within the team you are in and switch between with ease. There is also a Private groups option, as well as DMs. You can imagine what happens when you select one of those.

All I can really say is that if you are part of a team, and haven’t tried out Slack, you really need to get the person in charge to test it out. Slack is one of the best applications I have ever used, and it is really convenient to keep in touch with your team-mates. Plus, with the update to Slack 2.0, everything just got better, well at least for someone who loves a good design.