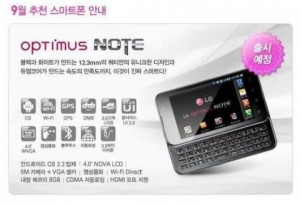 A new press photo leaked out of South Korea yesterday, showing another sliding QWERTY handset from LG. Called the Optimus Note, it’s said to feature a 1.2GHz dual-core Tegra 2 processor, 4-inch WVGA NOVA display, and 5-megapixel cameraa. Running Android 2.3 Gingerbread with a custom LG launcher, additional specs include a front-facing VGA camera, 8GB internal storage, and WiFi Direct capability. The four-row QWERTY handset is only 12.3mm thick and looks like the type of phone that could sell well at say, $99 with a two-year agreement.

There’s no indication that we’ll see the Optimus Note in the United States however multiple carriers are expected to offer a sliding QWERTY from LG. Looks quite a bit like the Optimus Slider, no?

LG Velvet will be cheapest at T-Mobile