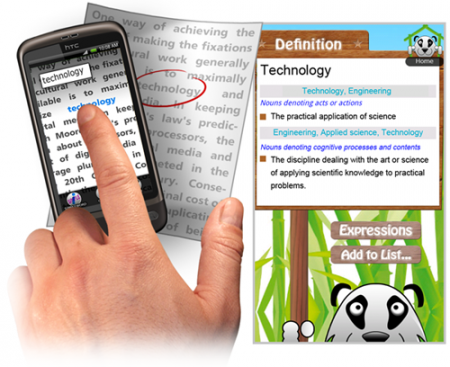 Remember when you first tried Swype? How about when you got a DVR and didn’t have to worry about watching TV shows when they were actually on? SnaPanda is a little like that: it takes a task we’re all familiar with, looking up a word in the dictionary, and gives you a new, better way of doing it.

Here’s how it works: when you come across a word you want to look up in a book or document, you fire up SnaPanda and point the phone’s camera at the page. Tap the word on your screen, confirm your choice, and SnaPanda returns the definition. I have to admit: it’s not only useful; there’s a little surge of delight in seeing it work.

Edulang, makers of SnaPanda, employs a couple of third party tools in making the magic happen: character recognition is accomplished via the open source Tesseract OCR, and the dictionary definitions themselves come from Princeton University’s WordNet. But Edulang has added some magic of their own, particularly in the way the app “grabs” the word you touch on the screen. It really works well, as long as you have decent lighting. And if not, there’s a button to turn on your phone’s flash LED.

The app is a natural for kids doing their English homework, and the app’s friendly panda bear mascot may mislead some to think it’s only an app for children. But it’s also going to be useful to a lot of adults: older students looking up unfamiliar words; adults learning English as a second language; and people like me, who just read a lot and occasionally come upon a word they want to look up.

Like Swype, a new kind of tool takes a bit of getting used to, and Edulang has put together a new user guide video that answers some common questions about how the app works. The video makes its worldwide debut right here on AndroidGuys.com:

Despite a beta label, SnaPanda is a polished app that works well. That said, it does have a couple of rough edges that hopefully will be polished off as it moves toward a 1.0 release. As mentioned, it does struggle in low light, and in general there is a bit of a learning curve in getting the hang of using it. Also, it did malfunction once in our testing: though apparently recognizing the word, it returned a different definition.

I’d also love to see a wider scope of reference materials available. I’d certainly pay a small fee to use the American Heritage Dictionary, while someone studying a specialized field might want to use the app to look up specific jargon. Translation, or at least foreign language dictionaries, seems like a natural fit as well, though Edulang says they are focusing on English, especially given stiff competition that exists in translation apps. But as-is, it’s certainly earned a spot on my phone, and is well worth a try for students and anyone interested in words.