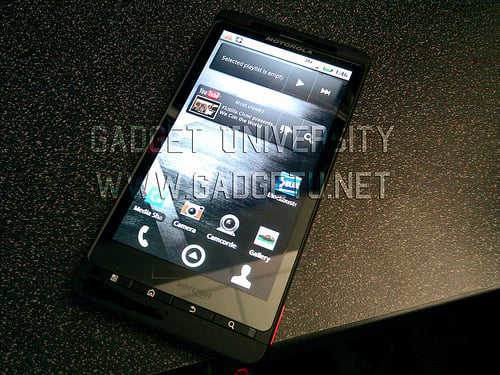 It’s not every day you get to see an unreleased phone stand still long enough to have some decent pictures taken.  The guys over at Gadget University were able to spend some time playing around with testing the not-yet-announced Motorola Droid X.  Also known as the Droid Xtreme, this touch only device looks to be another solid offering from the handset maker.

In terms of hardware, the picture gets clearer.  Gadget University is confirming the 4.3-inch touch screen, HDMI OUT, Android 2.1, and the updated MOTOBLUR. As we’ve been hearing over the last few weeks, this new version of MOTOBLUR is said to be less intrusive and not as noticeable. The processor has not been confirmed yet but it’s suggested we’ll see a 750MHz TI OMAP3630 chip when it hits Verizon over the next few weeks.  Looks like this could be Verizon and Motorola’s “answer” to the HTC EVO 4G.

So, who here is saving their money up for this one?

Respect knuckles to Android Community for the link.