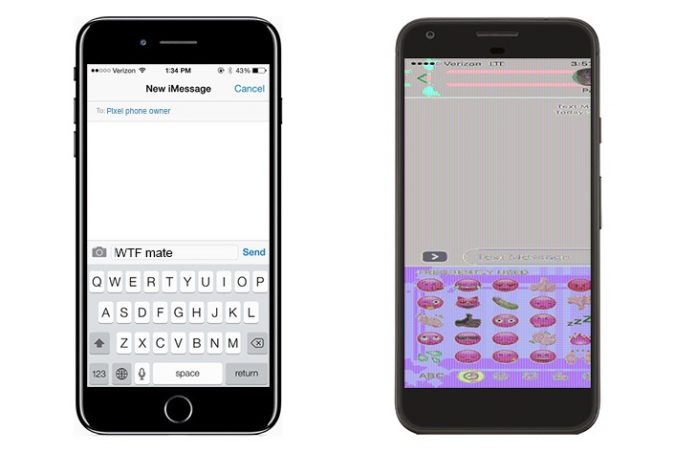 The Google Pixel and Pixel XL have been hailed as some of the best smartphones in 2016. However, the phones have been plagued with a few issues.

For example, some owners have been complaining their phones have problems with LTE band 4 connectivity. You’ve probably also heard of the camera flare issue, which Google said would be fixed by a software update. Well, the latest Pixel related issue seems to involve the iPhone.

According to people discussing the problem on the Google Product Forum, the Pixels seem to unable to display screenshots captured and sent via an iPhone 7 Plus.

This issue is very specific. The screenshot has to be captured from within an app and not from the device’s home screen. It also has to be sent via Hangouts or SMS/MMS to Google’s Pixel phones. Pixel owners will see a severely distorted image.

The problem does not pop up when the reverse happens – meaning when someone sends a screenshot from the Pixel to the iPhone 7 Plus.

There’s some indication the problem might be caused by an incongruity in the latest Android 7.1 update which doesn’t allow for apt image processing. A Nexus 6 user reported the same happening after he updated to Nougat (most likely via a ROM).

Google has apparently been made aware of the situation, but didn’t comment on the situation. If you are holding on to a Pixel or Pixel XL, is this happening to you too?