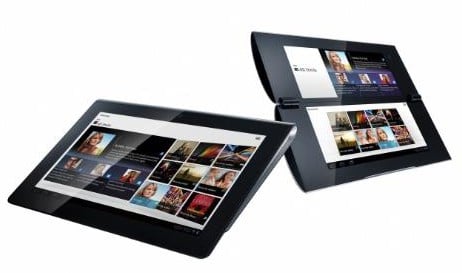 Sony confirmed the existence of two rumored Android 3.0 tablets today with a press release for their new “Sony Tablet”. Yup, that’s the name, for now. Engadget pretty much nailed every aspect of these devices a few months back but we’ll refresh your minds.

The first carries a code name of S1 and features a 9.4-inch display with an off-center gravity design. As some of you may recall, this shifted weight allows for longer, more enjoyable one-handed holding. This models is ‘optimized for rich media entertainment’ and ties in other Sony services and features such as Qriocity, PlayStation Suite, and Bravia.

The S2 is a clam-shell design with two 5.5-inch displays that fold up and make for easy portability. As Sony puts it, this form is ideal for mobile communication and entertainment. Much like Kyocera Echo does for phones, the S2 lets users do two things at once, such as watching video on one checking email on the other.

Hit the press release to read more information.  Look for the “Sony Tablet” to arrive in various markets around the world in the fall of this year, likely around back to school time.  The last we heard, the S1 will run about $599 for a Wi-Fi model while the S2 could run $699 when it arrives.