[alert color=”green”]Update 2/24/16: Sony has released a statement that the Z line is in fact going to be retired.

“The Xperia Z line has reached its culmination – Xperia X series represents a new chapter and evolution of our product strategy. Whilst the Xperia Z series was all about bringing the best of Sony’s advanced technologies to smartphones, Xperia X series is based on bringing smart, adaptive Sony user experiences across camera, battery performance and hardware / software design.”[/alert]

If you were caught off guard by Sony releasing their new Xperia X lineup of phones at MWC 2016 this year, you wouldn’t be the only ones. Seemingly out of nowhere, Sony released flagship, mid-range and budget phones – the X Peformance, X and XA, respectively. This, understandably, left some of us wondering where this new lineup of phones would land in Sony’s portfolio of devices. It appears, according to a post on Sony’s German Facebook page, that the X lineup is slated to take over for the Z Lineup. 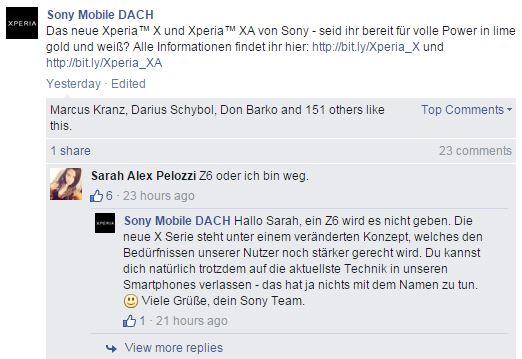 Sony’s reply: Hi Sarah, a Z6 will not exist. The new X series is under a modified concept that meets the needs of our users even more accessible. You can login course still rely on the latest technology in our smartphones – which has nothing to do with the name. smile emoticon Regards, your Sony team.

We’ll await further confirmation from Sony before burying our dreams of the Sony Xperia Z6, but it looks as good as dead right now. If you want to find out more about the new Sony Xperia X lineup, head over to our round-up of the phones to get all of the details. What do you think about Sony switching from the Xperia Z lineup to the Xperia X lineup? Let us know down in the comments.