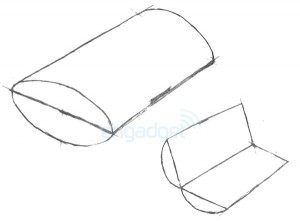 Last week we learned that Sony was prepping a Honeycomb (S1) tablet for release later this year.  We’ll admit that the 9.4-inch screen and custom UI has us interested, especially considering the company’s last few releases.  According to Engadget, Sony is also working on a second, dual-screen tablet called (what else) the S2. This model features a unique clamshell design with two 5.5-inch displays that can combine to form one image.

Generally speaking, the internal hardware is similar to that found in the S1 with a Tegra 2 processor system, WiFi/3G support, as well as front-facing and rear cameras. The outside form factor is where things differ as the S2 folds in half into an oval cylinder. Like they are doing with the S1, Sony is taking their time with the tablet, preparing a custom interface and experience for users. Rather than dumping it on the streets at the same time as all of these other Android 3.0 tablets, Sony wants it to stand out. As of right now, this tablet is expected to hit US, Japanese, and European markets in time for Santa to arrive. And as for price, it’s targeted at $699 US.