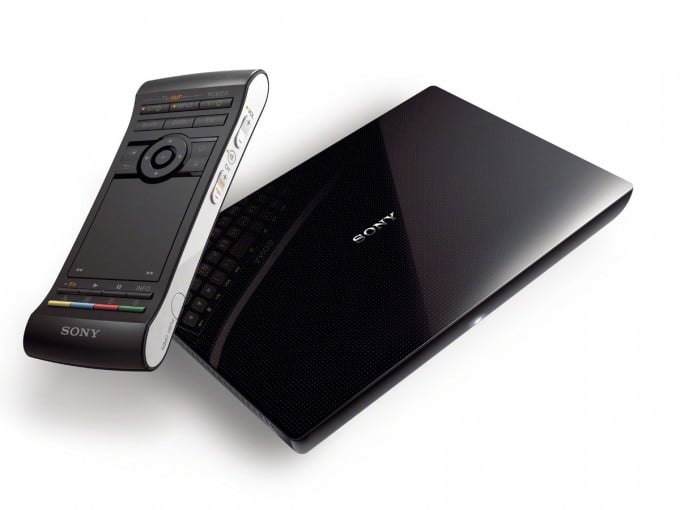 Sony has just announced their plans to release a new Google TV set-top box, the NSZ-GS7, on July 22. The hardware will go for $199, and will be released first in the US. After the US sales kick off, however, Sony will make the device available in the UK that same month, with Canada, Australia, France, Germany, The Netherlands, Brazil, and Mexico.

Sony has also announced that a Blu-ray version will come to the US in the fall, after which Canada, Australia, the UK, France, Germany, and The Netherlands will get the same Blu-ray love.

The device itself looks terrific, and is helping to kick off the 2012 GTV refresh Google promised us back in 2011. The box has a Marvell SoC dual-core CPU, which is a definite step up from the ATOM devices we’ve seen in the past.

How about the remote? Looks great from here as well. Front trackpad with a rear mini-qwerty… it definitely has the capacity to change the way folks think of Google TV.

Be sure to hit up the full presser below, as well as a photo  gallery, and let us know your thoughts in the comments.

SAN DIEGO, June 25, 2012 –  Sony Electronics Inc. today announced the availability and pricing of the NSZ-GS7 Internet Player with Google TV™, originally introduced in January at CES. Powered by Google TV, the Internet Player will be available at retailers nationwide on July 22, priced at $199. Pre-orders begin on June 25, 2012 at www.sony.com/sonygoogletv.

“Expanding the reach and interoperability of the powerful Android platform with Sony’s smartphones, tablets and renowned Audio & Video products, we are proud to continue our relationship with Google through the introduction of the new Google TV set-top-box,” said Phil Molyneux, president and chief operating officer of Sony Electronics. “Entertainment content is available through so many channels and sites, and Google TV helps consumers easily find what they want to watch, listen to or play using familiar search engine technology, enhancing the viewer experience. TV will never be the same.”

In addition to the NSZ-GS7 Internet Player, Sony’s newest Internet Blu-ray Disc™ player with Google TV, the NSZ-GP9, will be available at retailers in time for the holiday season, priced at $299. The NSZ-GP9 player features Sony’s proven Blu-ray Disc technology coupled with the robust Google TV platform.

In 2010, Sony helped pioneer the Internet-TV convergence as one of the first manufacturers to launch products powered by Google TV. With the new NSZ-GS7 Internet Player with Google TV, Sony will also be the first manufacturer to launch Google TV products outside of the United States, initially starting with the United Kingdom in July, followed later by Canada, Australia, France, Germany, Netherlands, Brazil, and Mexico. The NSZ-GP9 Blu-ray Disc player with Google TV will be available this fall in the United States, followed later by Canada, Australia, the United Kingdom, France, Germany, and Netherlands.

Sony’s evolution of hardware to complement the continually updating Google TV is the next step in the future of home entertainment convergence. Sony’s NSZ-GS7 and NSZ-GP9 bring the best of Google to your TV, with new experiences arriving every day through the Google Chrome™ browser; thousands of supported mobile apps in the Google Play™ Store, including hundreds optimized for TV; YouTube™ with 72 hours of video being added every minute; and a global community of developers from around the world. Google TV’s cross search functionality shows viewers all content sources available from broadcast providers* and the Internet to deliver customized video results on demand.

Both new products come complete with a redesigned remote control equipped with a backlit QWERTY keyboard, a touch pad for easy operation and a three-axis motion sensor to enjoy games. Additionally, the Bluetooth® remote control can also be utilized as a universal remote to control connected devices such as TV, set- top-box and A/V receivers – the NSZ-GP9 Blu-ray Disc player even incorporates voice search capabilities.

* Must be connected to a set top box for cable TV or satellite broadcasting in the U.S for TV integration.