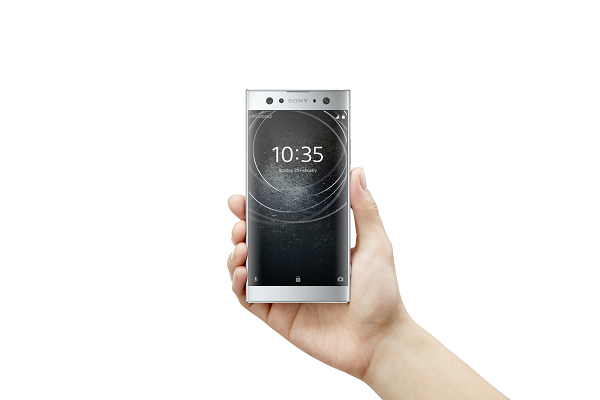 Sony today at CES 2018 unveiled two new middle-range phones from the XA line – the Xperia XA2 and Xperia XA2 Ultra – which bring some interesting capabilities to the table, especially in the selfie department.

But unlike other smartphone makes, Sony doesn’t seem to be rushing to jump on board the bezel-less 18:9 aspect ratio bandwagon.

Don’t get us wrong, Sony’s new phones benefit from razor-thin side bezels (most Xperia do), but the bottom and upper ones continue to retain their usual bulkiness. That is not to say, some changes in design are not on the menu.

This time around, the fingerprint scanner is no longer embedded in the power button on the side but lives on the phone’s back. So at last, users in the US will be able to take advantage of this feature, as well.

When it comes to specs, the Xperia XA2 and XA2 Ultra are solid middle-ranges, both powered by a 2.2GHz Snapdragon 630 processor. The Xperia XA2 is the smallest one of the duo, coming with a 5.2-inch display with the standard 16:9 aspect ratio and 1920 x 1080 resolution, while the Ultra takes advantage of a 6-inch panel with the same ratio and FullHD resolution.

The two models differ slightly in the RAM + storage department, with the Xperia XA2 offering 3GB of RAM + 32GB of storage, while the Xperia XA2 Ultra bumps it up to 4GB of RAM and 64GB of storage. Both models include a microSD card slot for memory expansion.

When it comes to photography Sony doesn’t disappoint. Both mid-rangers take advantage of a primary 23-megapixel camera capable of shooting 4K video and 120fps slow-motion clips.

On the front, the standard Xperia XA2 includes a 120-degree wide-angle, 8-megapixel camera to let you fit in more things in your shots, while the Ultra takes advantage of two selfie snappers – the same wide-angle one plus a second 16-megapixel sensor with OIS (optical image stabilization) for super-stable, super-clear selfies.

Besides selfie enthusiasts, music lovers might also take an interest in the new Sony phones. You see, the Xperia XA2 and Xperia XA2 Ultra come equipped with SmartAmp, a sound-enriching feature which should produce better sounding audio. Yet, don’t get your hopes up about stereo speakers.

Sony’s new phones rely on 3,300 mAh and 3,580 mAh batteries respectively, which should be good enough to sustain a full day of use. And Sony’s Qnovo Adaptive Charging promises fast charging times.

Unlike a lot of phones launching these days, the Xperia XA2 and Xperia XA2 Ultra will go on sale this February with Android 8.0 Oreo out of the box. Prices have yet to be announced, but we expect them to revolve around $300+.