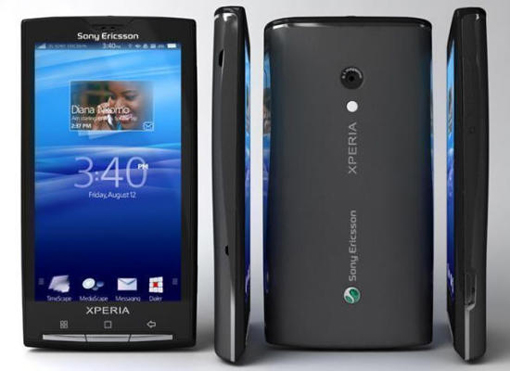 Okay, I’ve had the X10 since 8:30pm last night now (but I had to sleep some) so here is my initial GutReactionReview™. This will be quick, and mostly point form. It’s possible that any “problems” I list might have solutions, but the whole point is what the reaction of a first-time smart-phone buyer might be, especially if they aren’t too savvy, or know how/where to solve these things on their own.

• Formfactor: The X10 is a “big” phone in your hand. It’s larger than the Magic for sure, but comparable to the iPhone. It “feels” big in my hand, a lot closer to the feel of the Palm TX PDA I used to use. Some people won’t like this, and it is taking some getting used to, but I like having a lot of screen real-estate. Despite its size, however, it’s surprisingly light! The Xperia X10 looks like a nice phone. while aesthetics are subjective (like art and music) I think most people will like having and showing off this phone. It has very nice lines, a beautiful big screen, and classy/modern-looking silver/steel highlights. The back cover has a nice slightly “rubberized” (is that the best word?) feel to it. It’s a little odd having the volume button on the right side, but probably only because the volume rocker is on the left side of my Magic, and I’m used to it. So, really this is my problem, and not the X10.

• Screen: Did I mention the screen is nice and BIG! Great for watching video and looking at photos. If you look close though you can see that the icons aren’t actually “sharp”. They look just the slightest bit “fuzzy” around the edges, but only if you look close. However, I did notice it, so others might as well.

• Power Button: The power button, at the top, is used not only to power the phone on and off, but to bring it out of sleep mode. I am used to hitting the Menu button on my Magic to do this, and it feels kind of awkward to me. The way you hold these phones when you are using them for anything other than making calls, it seems more intuitive to press one of the hard buttons on the front of the phone.

UPDATE (04/23): Janne (a visitor at AndroidGuys) points out that you can in fact wake the phone by pressing  the middle hard button on the front, so my complaint is retracted. Thanks, Janne!

• User Experience: This is sort of a catch all area. The X10 comes with some widgets preloaded on the screen (only 3 home screens. C’mon guys, give us more!) including a widget for TimeScape™, and a very nice digital clock widget. Personally I find the “unlock’ sliding graphic kinda of lame, but some people like it. Just a personal thing, I prefer pressing the hard button on my phone to unlock, but I can see how an actual software on-screen unlock can actually be more secure since you can’t accidentally unlock it. There are some minor annoyances throughout, but I will cover them all at a later date.

• Keyboard: The X10’s on-screen keyboard is HORRIBLE!!! Trying to figure it out was driving me crazy, especially to get special characters. The keys are smaller then the keys on the Magic’s onscreen keyboard but just enough to make it even harder to see what you are pressing, and to type quickly. To get certain characters, like a comma or exclamation mark, you have to double-tap the period or question mark keys, and if you don’t do it just right, you get two periods or question marks. Unlike the Magic keyboard, there is no key to “clear” the keyboard from the screen. Instead you have to press the Back button on the phone. I had to figure this out on my own. Also, when you are typing the phone suggests so many different words as you type (some which have NO resemblance to the word you are typing) that it is unnecessarily overwhelming. Also hard to see, since they are little grey rectangles with small black font. Strangely, there are settings available for the default Android keyboard in the phone settings, but I could not find anywhere to actually disable the X10’s keyboard in favour of the default Android keyboard! Lame!

UPDATE 904/23): Janne (visitor at AndroidGuys) says “If you long-press in an input field you can choose the input keyboard you want to use. The phone will keep using that one until you change again. That said, I don’t find any substantial usage difference between the standard keyboard or the Android one.” I haven’t tested this yet, but I will.

• Camera: It’s 8 MP, and has a flash. Except, just don’t rely too much on the flash. I haven’t tested the flash myself yet, but Puleen tried it on his demo unit last night, and it didn’t seem very useful. Also, rather un-intuitively, to take a photo you depress the “camera button” (on the side) half-way to focus, and the rest of the way to take the photo. The problem is, when you have pressed it half-way, it feels like you’ve pressed it as far as you can go. It can actually be pressed farther in (harder) but it’s not easy to realize. I gave the phone to two “common users” (both of whom have iPhones), and even after I told them about pressing the shutter button harder to actually take a photo they kept saying “I have, it won’t go farther”. They had to press it really far in to get it to work, and were surprised by it. If you didn’t figure it out, you’d think the camera wasn’t working. I haven’t had time to do any indepth testing yet, but I will put the camera through its paces and post some of the photos I get.

UPDATE (04/23): You can increase or decrease exposure while using the flash, but I still haven’t tested it myself, so I will strike that part of my GutReactionReview until I have tested more.

• TimeScape™: An interesting feature. TimeScape is a visual display of your Facebook, Twitter, Email (but not Gmail?!), Photos, Missed Calls, Music, and text Messages. Each one has its own screen (swipe left and right to get at them) and each is represented in a “tower” of floating “card” that you can swipe up or down. You set up your Twitter and FB accounts, and then set the frequency that they will refresh. Kind of annoying… it doesn’t seem there is a way to send a Tweet or an FB post from TimeScape directly. Instead you tap on the individual “card” to which you want to respond and it will open the browser and load the mobile page for twitter or FB. I wish I could tweet directly from TimeScape. TimeScape can also be set as your default “Home” screen (or skin, if you will) so that those floating Twitter, FB, or other feed towers are always on screen. This can be cool for people who are all about the social media thing, but that’s not me. Also, the images used in the Twitter and FB tower feeds seem rather “low-res” and not very impressive.

UPDATE (04/23): Max (a visitor at AndroidGuys) points out that there is an “Update” option in the TimesScape menu to post to FB & Twitter, so it can be done. I still think, however, that it would be way better if they had a button on the actual screen to do it, instead of hoping someone finds it in the menu.

• MediaScape™: MediaScape is very smooth, very slick, and very cool. It’s not even a contest between MediaScape and the default HTC gallery or music player (I don’t have Sense UI, so I can’t compare to that). This is something I would enjoy showing other people when pulling out this phone! Two thumbs up. More on MediaScape when I have time. (For those who don’t know, MediaScape is a photo gallery, music app, video viewer all rolled in to one, and supports adding online services directly. For example in the photo gallery you can directly add support for FB or Picasa, but apparently not Flickr. What!?! Right?!)

• The Rogers Stuff: Less of the Rogers stuff that was on the Magic and Dream, but still… Rogers stuff. The Rogers logo shows on bootup (but that doesn’t really bother me). There is an icon for the Rogers MyAccount app, but the app is not actually pre-installed! instead it links to the app in the marketplace. You still have to install it. This replaced the pre-installed icon. There is also a pre-installed “Shop” icon, that goes to the usual Rogers sites in the browser. Attention Rogers… I will never use this! Why bother? Rogers also pre-installs an app called UrMusic. It is a music player, but a horrible one. Those of you with the HTC Magic and Dream… this music player looks worse than that. It’s also pretty pointless since the X10 comes with the MediaScape player that pretty much rolls over UrMusic without even noticing it hit something. I can only assume this app was rushed to be on the X10 in time for launch, but who knows. It seems the only real reason it is there is because you can use it to buy music  online (from Rogers?) but it only seems to work when you have a 3G/Data signal so that Rogers can “verify” your device. I was able to connect last night with data on, I assumed my phone was “verified” but now that I don’t have data, it doesn’t let me in. Seems you have to buy your music using your data, and not WiFi, I guess so Rogers can make more money when you go over your limit? Maybe Rogers can clarify for us.

That’s it for my quick GutReactionReview™. So far I like the phone in general, but there are some irritants (but don’t all phones have those?). I will write a more in depth review after more use. Leave questions in the comments, and I’ll try to answer them.