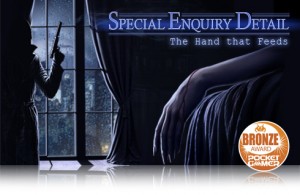 Join the NY PD’s finest; crack the case, catch the criminal, bring on the justice

Special Enquiry Detail: The Hand that Feeds was originally developed for PC by Floodlight Games. When the game launched on the iOS platform, it was immediately named one of the best five hidden object games by iPhone Quality Index, and received the Bronze award from Pocket Gamer. In addition, Special Enquiry Detail: The Hand that Feeds has been #1 Top Grossing iPhone game in UK and Top 10 Grossing game in 35 markets, and generated nearly 1 million downloads in 30 days since launch.

Special Enquiry Detail: The Hand that Feeds offers an intriguing tale of murder and corruption. New York detectives Turino and Lamonte are investigating a heinous death of the daughter of wealthy benefactors. Under pressure from the Mayor and their commanding officer to solve this scandalous case quickly, the two detectives must uncover the trail that leads to the murderer. Your task: help with forensics, investigate the clues and interrogate suspects to find the criminal and unveil the secrets and deceptions of those involved.

The scenery in each of 30 locations is so realistic that even the most subtle nuances come to life: specks of dust, flies in the room and even coffee fuming in the Big Boss cup. Use items in your inventory in order to solve each of 25 puzzle mini games. Pay attention to what you are told – even the smallest detail could solve this murder! Take on Special Enquiry Detail: The Hand That Feeds and become a New York City detective pursuing justice.

This game can be played over and over: hidden evidence appears in alternate locations on consecutive play sessions. Completing all the 12 chapters unlocks the “Find All” mode, allowing you to return to all locations and explore them once again.