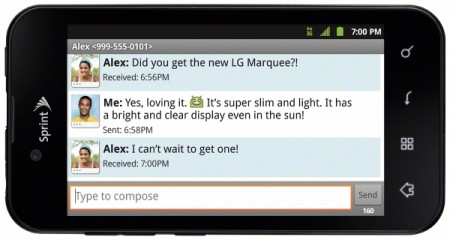 Sprint and LG have announced their next collaboration, the Marquee, and Android 2.3 Gingerbread handset that marries both style and substance.  Making its debut smack dab in the middle of New York Fashion Week, the $99 handset features a 4″ NOVA Display, 1GHz processor, 5-megapixel camera, and 2-megapixel front-facing camera.  You’d be forgiven if you thought we were talking about the Optimus Black seeing as how it’s essentially a Sprint-branded version of the handset.  Additional specifications include 512MB RAM, 2GB ROM, and support for Wi-Fi (802.11b/g/n), GPS, and Bluetooth.

The LG Marquee will hit Sprint stores nationwide on October 2nd and run $99.99 with a  two-year contract and after a $50 mail-in rebate.  Wanna get one earlier?  Pre-sale orders begin on Tuesday, September 20th and end one week later.   Customers who pre-order LG Marquee will begin receiving their devices on Thursday, Sept. 29 – three days before the device goes on sale.

As Sprint’s first device available for advance pre-sale, customers can buy LG Marquee beginning on Sept. 20 at www.sprint.com/marquee for $99.99

TLC’s Stacy London and up-and-coming designers team up to invite consumers to make “The Bright Choice” with a MADE Fashion Week Campaign promoting the thin, light and bright LG Marquee

New York City – Sept. 14, 2011 – Sprint (NYSE: S) and LG Mobile today announced the upcoming arrival of an Android device that perfectly pairs fashion with technology – LG Marquee Android™, exclusively from Sprint. The device will be launched in partnership with non-profit design collective MADE, formally known as M·A·C & Milk, at this year’s MADE FASHION WEEK in New York City. Keeping with the smartphone’s innovative convergence of technology and fashion, LG enlisted Stacy London of TLC’s “What Not To Wear” to act as resident style mentor to five up-and-coming MADE designers as they craft chic carrying cases for LG Marquee.

LG Marquee arrives on the Sprint Network on Sunday, Oct. 2 for just $99.99 (excludes taxes) with eligible upgrade or new two-year contract and after a $50 mail-in rebate via reward card1 (pricing excludes taxes). It will be the first Sprint device to be sold in advance online. Pre-sale orders begin on Tuesday, Sept. 20, and end on Tuesday, Sept. 27, at www.sprint.com/marquee. Customers who pre-order LG Marquee will begin receiving their devices on Thursday, Sept. 29 – three days before the device goes on sale.

“These days, a wireless phone is much more than just a communication device – it also echoes one’s personal style and taste,” said David Owens, vice president – Product Development, Sprint. “Design has become a key factor in the purchase decision and the LG Marquee is sure to turn heads.”

LG Marquee is an ideal mobile device for anyone who wants superior performance without sacrificing personal style. The sleek, ultra-thin smartphone features a 4-inch NOVA display and a virtual QWERTY keyboard. Encouraging consumers to make “the bright choice,” LG Marquee boasts a remarkably vivid and visible screen, even in direct sunlight.

The device features Sprint ID, allowing users to customize up to five screens on the device with a couple simple clicks. Sprint ID allows users to cut through the clutter of Android Market’s more than 250,000 apps by simply selecting from a variety of mobile ID packs featuring apps, ringers, wallpapers, widgets and more. Available Sprint ID packs include: Fashion and Beauty, E!, MTV Music, Green, and NASCAR Sprint Cup.

LG Marquee requires activation on a Sprint Everything Data plan for smartphones2. Sprint’s Everything Data plan with Any Mobile, AnytimeSM includes unlimited web, texting and calling to and from any mobile in America while on the Sprint Network, starting at just $69.99 per month plus required $10 Premium Data add-on charge. The Mobile Hotspot option is available for an additional $29.99 per month supporting up to five Wi-Fi enabled devices simultaneously3 (pricing excludes taxes and surcharges).

Celebrating Technology and Fashion
The LG Fashion Week campaign pairs Stacy London’s impeccable style with the innovative, futuristic eye of MADE. London brings years of fashion-industry experience to her LG style mentor role and will provide each of the MADE designers with creative consulting sessions as they design fashion-forward carrying cases to showcase the clean, modern, minimalist styling of LG Marquee. Participating MADE designers include Kevork Kiledjian, Katie Gallagher, The Lake and Stars, Erickson Beamon and Christian Cota.

“Being able to give our designers yet another platform for growth and exposure is part of the DNA of MADE; and allowing our designers to interact with major brands like LG is a great learning tool for future partnerships,” said Jenne Lombardo, Co-Director of MADE.

Celebrating a partnership of Sprint and LG’s rich style heritage, the campaign highlights the increasing influence of technology on today’s design community and includes a Fashion Week panel discussion and product launch reception hosted by London at Milk Studios on Thursday, Sept. 15. The MADE panel discussion, entitled “How Fashion Communicates,” will be moderated by Simon Collins, dean of fashion at Parsons The New School for Design, and will take an in-depth look at five key areas where technology has altered fashion design. As part of the esteemed panel, London will provide industry insights to discussion categories including designer communication, the rise of the blogger, public access to real-time happenings, retail and the shift from print to digital media.

The chic and functional LG Marquee carrying cases created by the participating designers will debut on Sept. 15 during LG’s launch event at MADE FASHION WEEK. The event will feature individual designer stations that will display the inspiration behind each case. In addition, at the end of the evening, London will announce her top designer pick for the overall campaign.