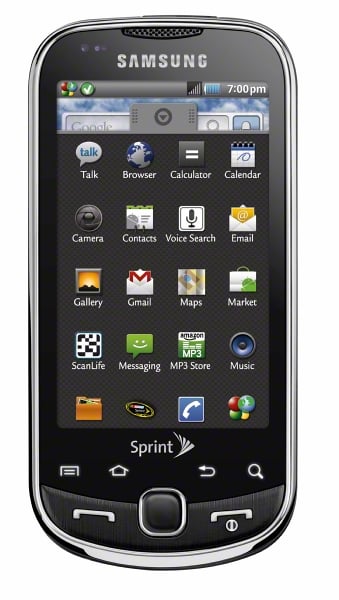 Yesterday Sprint formally announced the next chapter in their Android saga with the entry-level Samsung Intercept.  The phone, which runs $99 after $100 mail-in rebate, is essentially the follow up to last year’s Moment.  Features include a 3.2-inch touch screen, a 3.2-megapixel camera, and a full sliding QWERTY keyboard. For those of you concerned about the inner workings, you’ll be pleased to learn the Intercept packs an 800MHz processor, 512MB ROM, and 256MB ROM in addition to support for WiFi, GPS, and stereo Bluetooth

The Intercept runs stock Android 2.1 and has the full Google experience, meaning all the requisite apps are there: Maps, Search, YouTube, etc.  Available in Gray Steel and Satin Pink options, the phone hits Sprint stores and select retail partners around the country on July 11th. 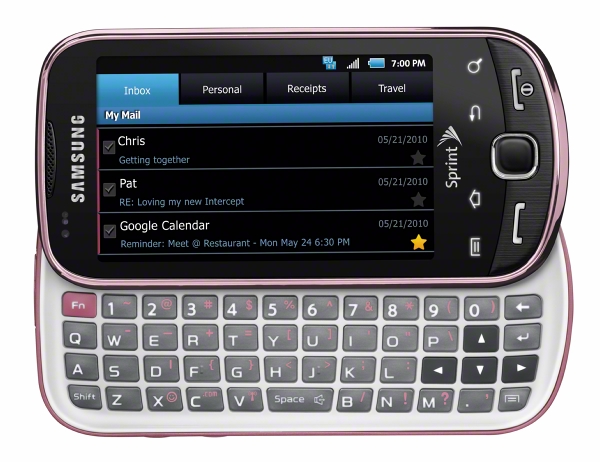 Combining the Power of Android with Sprint Value, Samsung Intercept™ Packs in the Features for Just $99.99

Full QWERTY keyboard, large touch-screen display and a premium social networking experience combine with the customization of Android to make Samsung Intercept a great value for businesses and consumers

Customers can purchase Samsung Intercept starting July 11 through all Sprint channels, including Web (www.sprint.com), Telesales (1-800-SPRINT1) and select national retail partners. Retail pricing will be just $99.99 (excluding taxes) after a $100 mail-in-rebate with a two-year service agreement on a new line activation or eligible upgrade on an Everything Plan with data. It will be available in two attractive colors – Gray Steel and Satin Pink.

Loaded with Android 2.1, Samsung Intercept provides access to popular Google™ mobile services, including Google Search™, Google Maps™, Gmail™ and YouTube™, and more than 50,000 applications available in Android Market™ today. It also features a powerful processor to make it a snap to maneuver within the device.

“Samsung Intercept is a valuable addition to our growing portfolio of Android phones with a rich Internet browsing experience, visual voicemail and practically all of the latest must-have features,” said Kevin Packingham, senior vice president of product development for Sprint. “Best of all, at this price, we are able to bring the Android experience to a broader audience that will appreciate the versatility that comes with access to thousands of apps on Android Market. This is a great device for those who use their wireless device to manage a business or socialize with family and friends.”

Samsung Intercept requires Sprint’s industry-leading Everything Data plans with Any Mobile, AnytimeSM that include unlimited Web, texting and calling to and from every mobile in America while on the Sprint network. Everything Data plans start at $69.99 per month – the same price Verizon and AT&T charge for unlimited talk only. (All price plans exclude surcharges and taxes.)

Sprint is the only wireless carrier to offer Ready Now service with trained retail associates to work one-on-one with customers to personalize their Samsung Intercept, set up features and demonstrate how it works before the customer leaves the store. Customers have the choice of sitting down with a Sprint retail associate at the time of purchase or they can schedule an appointment for a later time at www.sprint.com/storelocator.

More Satisfied Than Ever
Offering affordable plans to such feature-rich smartphones like Samsung Intercept is one of many reasons Sprint has excelled in customer satisfaction. Sprint is the most improved company in customer satisfaction, across all industries, over the last two years, according to results from the 2010 American Customer Satisfaction Index.

Sprint’s improvement was driven in part by substantial gains in two aspects of the survey. In the area of customers’ perceptions of value, Sprint now leads both AT&T and Verizon. The company also achieved an impressive improvement in the area of customer loyalty. With these gains, the company’s overall ACSI score jumped 14 points during the last two years. In the last six years of the ACSI survey, no other company has improved its satisfaction score by that many points in a two-year period.

The improvements in the ACSI survey come as Sprint has seen nine consecutive quarters of improved customer satisfaction and first call resolution. The company’s improvements have also been recognized by other independent third-parties, including Sprint winning the #1 spot for both overall satisfaction for wireless voice service providers and wireless data service providers in a Yankee Group and Mobile Enterprise magazine survey of large business decision makers. Sprint also ranked high in small and medium business customer satisfaction. Also noteworthy was Sprint’s two-year Reputation Pulse™ score increase in Reputation Institute’s 2010 U.S. Most Reputable Companies Study (published annually in Forbes). Sprint’s 18.22 percent gain puts its improvement in the top 10 percent of the 150 largest U.S. companies, ahead of both AT&T and Verizon.