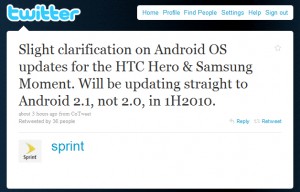 If you are an HTC Hero or Samsung Moment owner, you can now stop worrying about theÂ Nexus One, as you’ll also be enjoying the latest andÂ greatestÂ of Android in the very near future.Â  That is if you count the next six months as “near future”.Â  Similar to how the news was broken last week,Â  Sprint and HTC both tweeted announcements today regardingÂ  Android updates to the Hero and Samsung Moment.Â  BothÂ phonesÂ are going to jump from 1.5 directly to Android 2.1 as opposed to 2.0 as originally announced.

Slight clarification on Android OS updates for the HTC Hero & Samsung Moment. Will be updating straight to Android 2.1, not 2.0, in 1H2010. – Sprint via twitter


Anybody notice the clarification from @sprint? Hero on Sprint will not be getting 2.0…it will get 2.1 :). – HTC via twitter 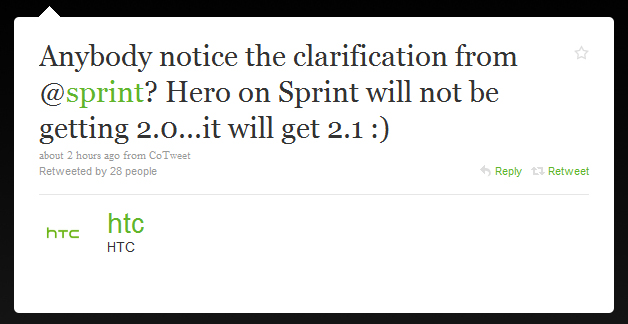