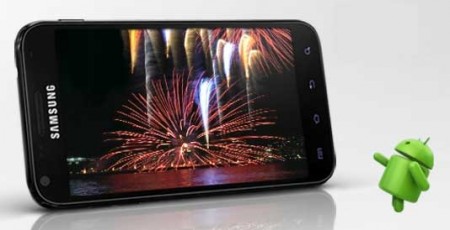 Sprint will be the first U.S. carrier out of the gate to offer the Samsung Galaxy S II this year as the company officially recognizes the phone this evening.  The announcement is coming out of the Samsung event taking place in New York tonight but Sprint’s newsroom has the details for everyone to see.  Look for the Epic 4G Touch to land in but a few short weeks with a very attractive $199 price tag.

Hit the break to read the full, super-lengthy press release if that’s your style.  We’ll just sum it up here and tell you that the specs that leaked just a few hours ago are correct.

As Sprint’s 27th 4G-capable device, Epic 4G Touch boasts a 4.52-inch Super AMOLED™ Plus touchscreen and one of the industry’s fastest dual-core processors, the new Samsung Exynos™, bringing it rich content at blazingly fast speeds. Customers will benefit from a large screen which will offer a vibrant viewing experience delivering the best picture quality at the fastest speeds available.

Beginning today, customers can pre-order Epic 4G Touch at any participating Sprint store with the purchase of a $50 Sprint gift card. Customers who pre-order Epic 4G Touch will have their name added to the Device Wait List and be contacted to set up an appointment to complete their smartphone purchase beginning Sept. 16. Through the pre-order process, customers will know they are able to get the device they want and receive the full retail experience, including Sprint’s Ready Now service.

“Sprint is proud to build on the success of the first Galaxy S product, Samsung Epic 4G, with the first U.S. device in the next generation of Samsung’s award-winning Galaxy S lineup, Epic 4G Touch,” said Fared Adib, vice president–Product Development, Sprint. “Epic 4G Touch is a powerful smartphone that delivers vibrant and exciting content at lightning fast speeds. This device is ultra-thin yet ultra-powerful with a screen that rivals anything else in the industry.”

Epic 4G Touch is one of the thinnest smartphones, measuring just 0.38 inches thick. Its Super AMOLED Plus touchscreen display delivers brilliant colors with the most contrast, providing a vivid and crisp viewing experience. It is built on Android™ 2.3, Gingerbread, and powered by one of the fastest dual-core processors available along with the blazing-fast Sprint 4G speeds on America’s Favorite 4G Network2.

Other key features include:

“We are proud to build upon the successful launch of the original Galaxy S with Sprint last year,” said Dale Sohn, president of Samsung Mobile. “The Galaxy S II, Epic 4G Touch is the next-generation premium smartphone that delivers top-of-the-line features and design, as well as blazing fast speeds with Sprint’s 4G network and Samsung’s new Exynos dual core processor.”

Epic 4G Touch requires activation on one of the Sprint Everything Data plans plus a required $10 Premium Data add-on charge for smartphones. Sprint’s Everything Data plan with Any Mobile, AnytimeSM includes unlimited Web, texting and calling to and from any mobile in America while on the Sprint Network, starting at just $69.99 per month plus required $10 Premium Data add-on charge – a savings of $40 per month vs. Verizon’s comparable plan with unlimited talk, text and 2GB Web, or $10 per month vs. Verizon’s 450-minute plan with unlimited text and 2GB web. The Mobile Hotspot option is available for an additional $29.99 per month supporting up to eight Wi-Fi enabled devices simultaneously (pricing excludes taxes and surcharges).

Sprint Nextel offers a comprehensive range of wireless and wireline communications services bringing the freedom of mobility to consumers, businesses and government users. Sprint Nextel served more than 52 million customers at the end of 2Q 2011 and is widely recognized for developing, engineering and deploying innovative technologies, including the first wireless 4G service from a national carrier in the United States; offering industry-leading mobile data services, leading prepaid brands including Virgin Mobile USA, Boost Mobile, and Assurance Wireless; instant national and international push-to-talk capabilities; and a global Tier 1 Internet backbone. Newsweek ranked Sprint No. 6 in its 2010 Green Rankings, listing it as one of the nation’s greenest companies, the highest of any telecommunications company. You can learn more and visit Sprint at www.sprint.com or www.facebook.com/sprint and www.twitter.com/sprint.