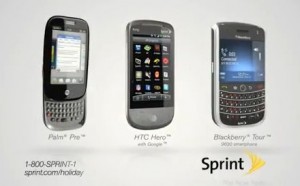 It only took a month or so, but Sprint finally decided to advertise that they have Android phones.Â  Is it awesome?Â  NO.Â  Sadly, they don’t even refer to ‘Android’ in the following commercial, but “with Google” instead.Â  Close enough. T-Mobile‘s been getting away with it for the better part of a year.

Check out a 30-second TV spot from the nation’s #3 carrier below.Â  The HTC Hero gets named alongside the Palm Pre and BlackBerry Tour as the “most impressive lineup of phones.”Â