If you are on Sprint and right now using either the Galaxy Nexus or Nexus S 4G, then today might be your lucky day. Folks over at Phandroid got their hands on an internal leak shot of Sprint’s system, and it clearly tells us that today, on September 6, Sprint’s Galaxy Nexus and Nexus S 4G will be updated to the mightiest version of Android yet, known as Android 4.1 Jelly Bean. 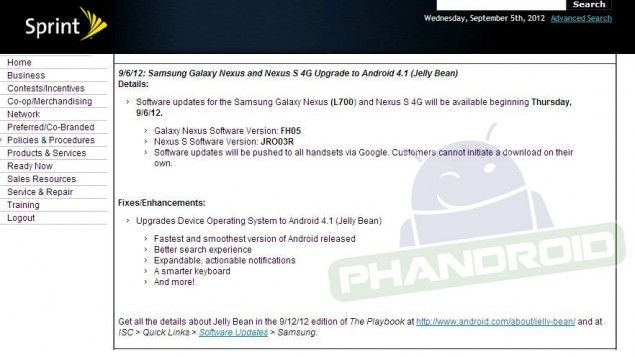 As it’s mentioned, Google will push the update to all the handsets, and customers cannot initiate a download on their own, but there’s nothing wrong in trying it yourself, right? If it’s your lucky day, then you will get a notification on your phone about the update from Google, but if you didn’t then don’t worry, because you are in the cue.

If your Galaxy Nexus or Nexus S is already on Jelly Bean, then don’t forget to share your first impressions with us in the comment box below.