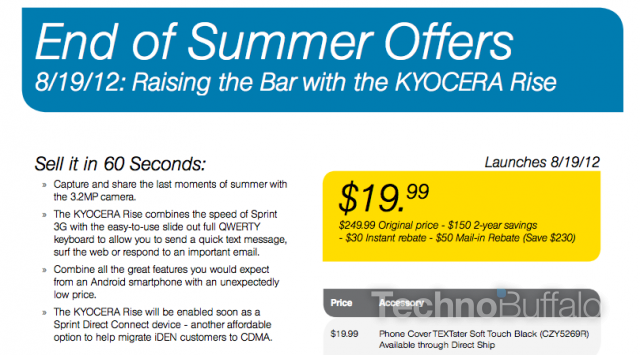 Sprint is one of the four major carriers in the USA and it’s offering a great line of Android smartphones that are capable of running LTE and also they got some good stuff under the hood. But Sprint is also trying to keep everything in balance, that’s why the launched the Kyocera Rise at CTIA recently, which is an entry level Android powered device with a sliding QWERTY keyboard.

Now according to TechnoBuffalo’s trusted source, Sprint will be launching it on August 19 for only $19.99 with a 2-yr agreement, and also it will feature Sprint’s Direct Connect push-to-talk support, but not out of the box, though it will be soon. Keep it in mind that it’s just a low-end 3G-only device, and it features:

Well, if you are looking forward to a low-end phone from Sprint, then the Rise is for you. Are you planning to get it? Tell us about it in the comment box below.