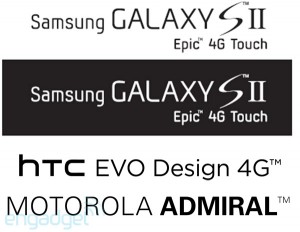 A fresh Sprint leak coming in the middle of the night confirms the name of the upcoming Galaxy S II and also tips the hand on a pair of new devices in the process.  As recently uncovered, the Galaxy S II has been changed from Within to Epic 4G Touch, all but confirming the sliding QWERTY will not make the cut this year.

The HTC Kingdom appears to be nearing its release and should carry the name of EVO Design 4G, and not Hero 4G.  Rumors peg this handset as being very similar to the EVO 3D save for the lack of 3D and having but one single-core processor.  As for the Motorola Admiral, well, we’ve got nothing to go on just yet. If the name is any indication, we’ll be looking at a 3G handset, presumably running Android.

The change in Android landscape

Miss Black Friday? Check out these penny deals at Amazon!