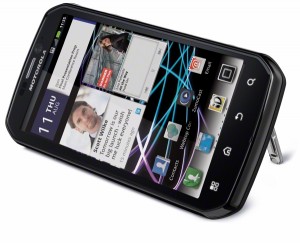 The luncheon is over and Motorola and Sprint have just announced a “reinvigorated” business relationship. As a demonstration of this, Sprint, along with their prepaid brands of Boost Mobile and Virgin Mobile USA, will release more than 10 new Motorola devices in 2011. The first of these being the Photon 4G for Sprint and the Triumph over on Virgin Mobile USA.

The Photon 4G is pretty impressive stuff,  sporting a 1Ghz Tegra 2 (dual-core) processor, international GSM capabilities, a 4.3 inch qHD display, a kickstand and dual cameras, the rear of which is 8 megapixels . It will come with 2.3 Gingerbread and the latest version of Moto’s UI “enhancements”. Like the Atrix 4G before it, Motorola’s webtop application is also supported here,  allowing users to dock their phone for use as a laptop.

The Triumph seems to be a bit more tame in comparison, with 512MB RAM and 2GB ROM but with no mention of dual core. Although it is super thin at 0.4 inches thick, with a 4.1 WVGA touch screen and dual cameras (720p video capture). From the images we were sent it looks to be stock Android with no UI enhancements, but here’s the kick in the teeth…It’s Froyo. It’s been over a year since the Nexus One received Froyo.  In my opinion,  no devices released from now on should come with anything less than Gingerbread.

Some of the other devices due for release later this year include; Motorola Titanium (built on Android 2.1…*sigh*), Motorola Theory and Motorola i412 available on Boost Mobile. Let’s hope Motorola can update and keep updating these new devices though you’ll have to excuse my pessimism as I’m still waiting for the 3.1 update to my UK Wi-Fi-only Xoom whilst the Transformer has had it for over a week now.

So what do you guys think? Are you excited about the new devices? Or would you prefer Motorola to focus on keeping their current devices up to date for longer? Let us know in the comments below.