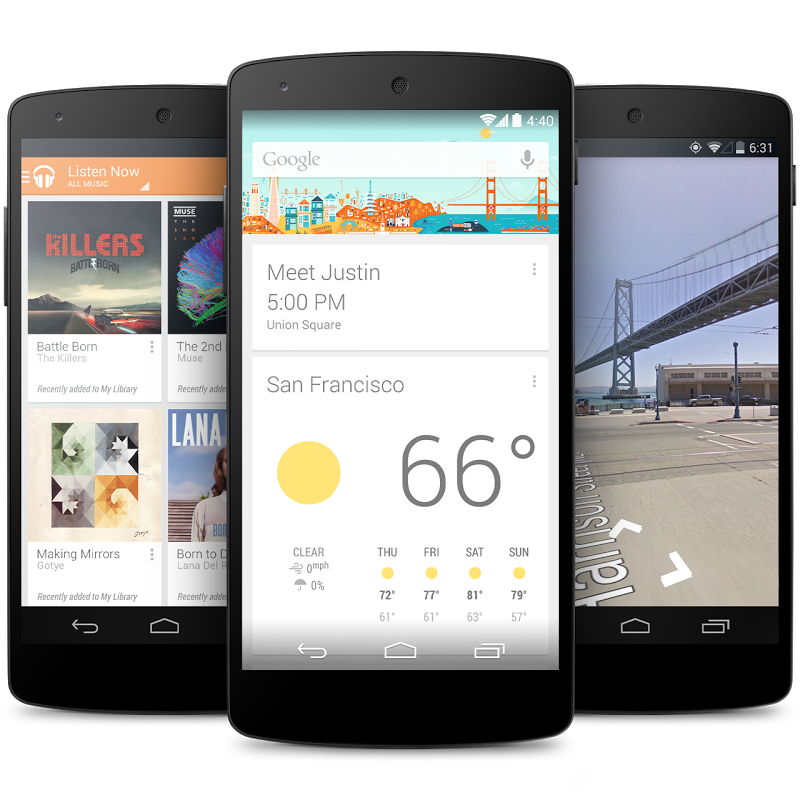 Sprint on Thursday confirmed that the Nexus 5 will soon join the carrier’s roster. Priced at $149.99 with a two-year service agreement, the flagship Google smartphone will be sold starting from November 8. Pre-orders begin on Friday, November 1. As expected, the Nexus 5 will be one of Sprint’s first devices to feature support for the tri-band LTE service, Spark.

Sprint to Launch Nexus 5 by LG Smartphone on Nov. 8;

OVERLAND PARK, Kan. – Oct. 31, 2013 – Sprint (NYSE:S) and LG Electronics USA today announced Nexus 5 from Google will be available from Sprint beginning Friday, Nov. 8, for $149.99 (16GB version) after a $50 mail-in rebate via reward card1 with a new line or eligible upgrade and two-year service agreement or $18.75 per month with Sprint One Up (excluding taxes). Nexus 5 by LG will be available in all sales channels, including Sprint Stores,Web Sales and Telesales (1-800-SPRINT1). Customers can pre-order the device beginning Friday, Nov. 1, by visiting www.sprint.com/nexus5.

“Whether you’re streaming music or video, surfing the Web, gaming online or just catching up on email, in upgraded areas, Nexus 5 will offer Sprint customers a secure, fast connection using all three of Sprint’s 4G LTE network bands, giving customers the best wireless experience for their needs,” said David Owens, vice president-Product Development, Sprint. “With the dynamic camera features available on this smartphone, our customers will be able to enjoy sharing all their photos and have the peace of mind by not having to worry about data caps or overage charges. While other wireless providers move away from unlimited service, Sprint stands behind its commitment with Sprint Unlimited Guarantee, allowing our customers to lock-in unlimited talk, text and data, while on the Sprint network, not for just the next two years, but for the life of the line of service.3”

Nexus 5 by LG is made without sacrificing power and speed and features tri-band 4G LTE, a 2.26GHz quad-core Qualcomm Snapdragon™ 800 processor and ultra-fast Wi-Fi® to keep customers connected at blazing speeds to race through games, zip around the Web, and switch between apps at the flick of a finger. At only 4.59 ounces and 0.34-inches thin, it’s the most powerful Nexus phone yet.

James Fishler, senior vice president-Marketing, LG Electronics USA, said, “Nexus 5 by LG expands the successful LG-Google collaboration. This latest flagship Nexus smartphone combines the popular qualities of LG G2 with KitKat for the first time and we are proud that the Nexus 5 by LG will be among the first smartphones capable for use on Sprint’s new 4G LTE tri-band network, bringing to life our brand promise. With LG, it’s all poible.”

KitKat is fast and powerful yet simple to use. Android 4.4 takes system performance to an all-time high by optimizing memory usage in every major component. That means users can run more of their favorite apps and switch between them faster than ever.

The new phone app automatically prioritizes contacts based on who the user talks to the most. Whenever customers get a call from a phone number not in their contacts, Nexus 5 by LG will look for matches from businesses with a local listing on Google Maps™.

According to Pew Internet & American Life Project Nov. 2012, 82 percent of all cell phone owners use their phone to take pictures. Nexus 5 by LG makes it easier than ever to captures life’s important moments with its 8-megapixel rear-facing camera and convenient 1.3-megapixel front-facing camera. With Photo Sphere, Nexus 5 users can create the effect of an immersive 360-degree view that no traditional camera can match. Each image is enhanced as soon as it is saved, helping the people and places in the photos really stand out. Auto Backup automatically saves every photo and video.

Customers who sign up for Sprint’s new Unlimited, My WaySM plan or My All-inSM plan are eligible for the Sprint Unlimited Guarantee.3 The Sprint Unlimited Guarantee gives customers unlimited talk (calls to any wireline or mobile phone), text and data while on the Sprint network for the life of the line of service. The new Unlimited, My Way rate plans start for as little as $80 per month (excludes taxes and surcharges). The Unlimited, My Way plan can offer customers a significant savings when compared to competitors’ capped data plans. For example, smartphone customers can save $30 per month vs. AT&T and Verizon’s comparable plans with only 4GB of data.4

Sprint plans to deploy Sprint Spark in about 100 of America’s largest cities during the next three years, with availability today in five markets. Sprint 4G LTE service will be available by mid-2014 to approximately 250 million Americans, and Sprint expects 100 million Americans will have Sprint Spark or 2.5GHz coverage by the end of 2014. The first markets with limited availability are New York, Los Angeles, Chicago, Tampa and Miami. Nexus 5 by LG is among the first tri-band capable smartphones scheduled for customer availability in early November 2013.

Sprint (NYSE:S) offers a comprehensive range of wireless and wireline communications services bringing the freedom of mobility to consumers, businesses and government users. Sprint served more than 54 million customers at the end of the third quarter of 2013 and is widely recognized for developing, engineering and deploying innovative technologies, including the first wireless 4G service from a national carrier in the United States; offering industry-leading mobile data services, leading prepaid brands including Virgin Mobile USA, Boost Mobile, and Assurance Wireless; instant national and international push-to-talk capabilities; and a global Tier 1 Internet backbone. The American Customer Satisfaction Index rated Sprint as the most improved company in customer satisfaction, across all 47 industries, during the last five years. You can learn more and visit Sprint at www.sprint.com orwww.facebook.com/sprint and www.twitter.com/sprint.