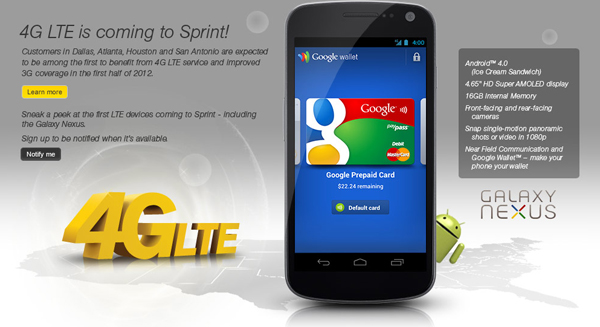 We saw a leak in an ad last week about Sprint getting the Galaxy Nexus and giving it LTE, and now it’s all confirmed. Sprint has made the phone official with everything we expected… but no mention of the 1.5 GHz CPU we hoped for. What do we have? Android 4.0.3, Super AMOLED display at 4.65″… yea, buddy. Sprint has recently announced the first markets to get LTE, so if you’re in these areas, pull out your wallet.. or – wait, you won’t need to, as the Galaxy Nexus comes with wallet.

Hit the presser below, and let us know your thoughts.

Customers in Atlanta, Dallas, Houston and San Antonio are expected to enjoy ultra-fast 4G LTE service and an improved 3G wireless experience before middle of year

The debut of these devices is a key element of Network Vision, Sprint’s plan to consolidate multiple network technologies into one seamless solution. With Network Vision, Sprint customers can expect to enjoy ultra-fast data speeds, improved 3G voice and data quality, and stronger in-building signal penetration providing a more valuable wireless experience and enhancing the value of current unlimited plans.

“The first three products that will run on the Sprint 4G LTE network exemplify the cutting-edge technology our customers can expect from Sprint as we progress with our 4G LTE rollout,” said Steve Elfman, president of Network, Wholesale and Product Development for Sprint. “Galaxy Nexus packs industry-leading features and the best of Google into a beautiful design while LG Viper 4G LTE continues Sprint’s commitment to green devices that don’t sacrifice speed or technology. These products combine with our unlimited data pricing plans to give Sprint customers a powerful wireless experience.”

On Jan. 5, Sprint CEO Dan Hesse announced that customers in Atlanta, Dallas, Houston and San Antonio are expected to be among the first to benefit from 4G LTE and improved 3G coverage in the first half of 2012. Additional areas that will receive 3G enhancements and 4G LTE expansion in 2012 will be announced later in the year.

Approximately 15 4G LTE devices are currently on track to be launched in 2012 including handsets, tablets and data cards. Additionally, 4G devices, including HTC EVO™ Design 4G, Samsung Epic™ 4G Touch and Nexus S™ 4G, will continue to be sold in 2012.

The new 4G LTE smartphones will benefit from Sprint Everything plans including the Everything Data Plan with Any Mobile, AnytimeSM offering unlimited data, texting and calling to and from any mobile phone in America while on the Sprint Network. With Sprint’s unlimited data plans, customers don’t have to worry about throttling or surprises on their monthly bill from data overage charges like they might with tiered data plans from other carriers.

Pairing the beauty of Samsung hardware with a pure Google experience, Galaxy Nexus on Sprint is built on Android™ 4.0, Ice Cream Sandwich. Ice Cream Sandwich brings an entirely new look and feel to Android. It has a redesigned user interface with improved multi-tasking, notifications, Wi-Fi hotspot, NFC support and a full web browsing experience. Galaxy Nexus features software navigation buttons, a first for Android smartphones. The lock screen, home screen, phone app and everything in between has been rethought and redesigned to make Android simple, beautiful and useful.

Ice Cream Sandwich introduces innovations such as Face Unlock, which uses facial recognition to unlock your phone. Using NFC (Near Field Communications) technology, Android Beam allows users to quickly share web pages, apps and YouTube™ videos with friends by simply tapping phones together. Users can even video chat with up to 10 friends with Google+ Hangouts for mobile. Galaxy Nexus will also be Sprint’s second smartphone enabled with NFC supporting Google Wallet, enabling the phone to be used like a wallet to make safe, secure purchases at hundreds of thousands of participating retailers.

Powered by Android 2.3, Gingerbread, LG Viper 4G LTE is equipped with a 1.2GHz dual core processor and two cameras – a 5-megapixel rear-facing camera and a VGA front-facing camera that makes face-to-face video calls a fun and easy experience. It offers a 4-inch WVGA NOVA display, hotspot capability and a microSD™ slot supporting up to 32GB. It is also compatible with DLNA-capable devices.

With Sierra Wireless™ Tri-Network Hotspot, customers can extend their Sprint 3G/4G experience beyond just their laptops to up to eight Wi-Fi® enabled devices, such as cameras, music players, personal media players and portable game consoles. In addition, its microSD™ slot allows teams to share files and presentations with network storage. It is simple to set up with no software required.

For the most up-to-date details on Sprint’s 4G LTE rollout, please visit www.sprint.com/4GLTE.

Sprint Nextel offers a comprehensive range of wireless and wireline communications services bringing the freedom of mobility to consumers, businesses and government users. Sprint Nextel served more than 53 million customers at the end of 3Q 2011 and is widely recognized for developing, engineering and deploying innovative technologies, including the first wireless 4G service from a national carrier in the United States; offering industry-leading mobile data services, leading prepaid brands including Virgin Mobile USA, Boost Mobile, and Assurance Wireless; instant national and international push-to-talk capabilities; and a global Tier 1 Internet backbone. The 2011 American Customer Satisfaction Index showed Sprint is the #1 most improved company in customer satisfaction, across all industries, over the last three years. Newsweek ranked Sprint No. 3 in its 2011 Green Rankings, listing it as one of the nation’s greenest companies, the highest of any telecommunications company. You can learn more and visit Sprint at www.sprint.com or www.facebook.com/sprint andwww.twitter.com/sprint.[/spoiler]