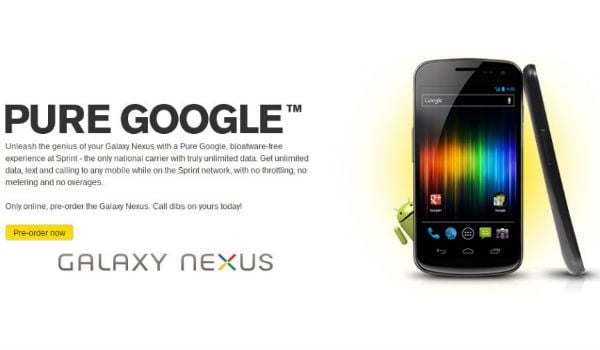 Sprint today announced that they will be offering their 4G LTE-ready Samsung Galaxy Nexus starting this coming Sunday, April 22nd.  Carrying a $199 price tag with two-year service agreement, the Android 4.0 smartphone is up for pre-orders effective immediately.  As an extra incentive, Sprint will toss a $10 instant credit into any Google Wallet account activated in the first week of handset activation.  What’s more, there will be an additional credit of $40 given within the next three weeks.

Specs for the Galaxy Nexus remain the same here and include a 4.65-inch Super HD AMOLED display, a 1.2GHz dual-core processor, 1GB RAM, 32GB internal storage, and 5-megapixel camera.  In terms of connectivity, the smartphone offers customers access to Sprint’s growing 4G LTE network.  If interested in pre-ordering the Galaxy Nexus, you can head to sprint.com/nexus.