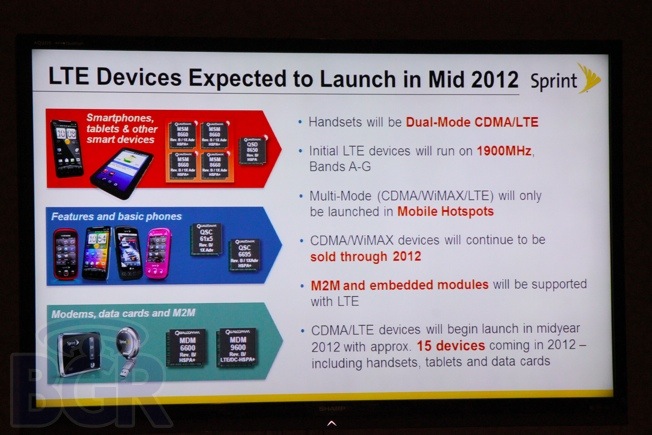 It looks like AT&T and Verizon won’t be alone in the LTE world for long, as Sprint has announced plans to rollout a vast LTE network by 2013. At its 4G Strategy/Network Vision event on Friday, Sprint CEO Dan Hesse explained how the LTE network will come to be:

Our progress deploying Network Vision enables Sprint to extend and evolve our 4G leadership and to improve the experience for 3G customers. Our next-generation network and cutting-edge device lineup, combined with the industry’s best pricing plans, give Sprint customers the best experience in wireless.

Sprint also announced plans for fifteen CMA/4G LTE devices in mid 2012, as reported by BGR,  to help consumers transition from CDMA to LTE. This lineup includes phones, tablets, and data cards. The main idea here is that they’ll launch LTE on their 1900MHz spectrum by the middle of next year, and then expand that coverage into 2013. Sprint is calling this plan “Network Vision,” which we think is pretty fitting.

No word on what kinds of speeds customers will see with LTE devices from Sprint, but only time will tell. The full press release can be found after the break.

So, who’s excited about Sprint’s switch to LTE? Anyone holding off on buying a phone until their new devices come out next year? Sound off in the comments!

OVERLAND PARK, Kan. (BUSINESS WIRE), October 07, 2011 – At its 4G Strategy/Network Vision Update event today in New York, Sprint Nextel (NYSE: S) updated the financial community on its plans to accelerate deployment of Network Vision and its plans to roll out 4G LTE on its licensed spectrum. Network Vision, originally announced in December 2010, is Sprint’s plan to consolidate multiple network technologies into one seamless network with the goal of increasing efficiency and enhancing network coverage, call quality and data speeds for customers across the United States.

Dan Hesse, Sprint CEO, said, “Our progress deploying Network Vision enables Sprint to extend and evolve our 4G leadership and to improve the experience for 3G customers. Our next-generation network and cutting-edge device lineup, combined with the industry’s best pricing plans, give Sprint customers the best experience in wireless.”

Euteneuer said, “Network Vision creates a platform for growth and competitive advantage and delivers significant profitability upside potential. Over the long term, continued execution on Network Vision as well as other improvements to our core operations are expected to result in overall margin expansion, improved return on invested capital, and, ultimately, increased value for our shareholders.”

A replay of the webcast may be accessed at www.sprint.com/investors.

Sprint Nextel offers a comprehensive range of wireless and wireline communications services bringing the freedom of mobility to consumers, businesses and government users. Sprint Nextel served more than 52 million customers at the end of 2Q 2011 and is widely recognized for developing, engineering and deploying innovative technologies, including the first wireless 4G service from a national carrier in the United States; offering industry-leading mobile data services, leading prepaid brands including Virgin Mobile USA, Boost Mobile, and Assurance Wireless; instant national and international push-to-talk capabilities; and a global Tier 1 Internet backbone. Newsweek ranked Sprint No. 6 in its 2010 Green Rankings, listing it as one of the nation’s greenest companies, the highest of any telecommunications company. You can learn more and visit Sprint at www.sprint.com or www.facebook.com/sprint and www.twitter.com/sprint.