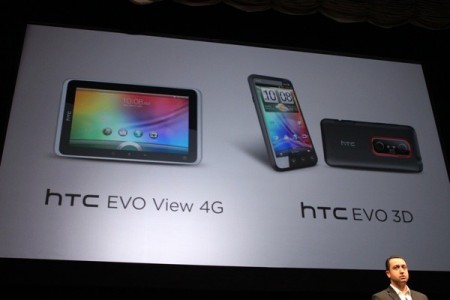 Come on, you’ve got to admit it, giving a 3D presentation for a 3D phone is actually quite cool. We’re talking about the EVO 3D and the EVO View, the two new EVO devices from Sprint. We’ve actually learned that EVO stands for ‘evolution’ and that Sprint’s got two new devices. The first device, the EVO 3D, is the successor of the Evo 4G (but sadly without a kickstand). It sports a 3D capable 4.3″ qHD screen, 3D recording, dual-core smartphone, and is manufactured by HTC. One can switch between 2D and 3D on the screen which is a rather smart decision, given the fact that 3D can cause people headaches. And here’s another feature–it can output 3D content to your 3D TV.

The second device is the EVO View 4G, which is actually  just a rebranded HTC Flyer capable of 4G. That means it’s a 7″ 1.5GHz single-core tablet with HTC Scrybe. Just like the Flyer, it launches with Android 2.4 skinned with HTC Sense, and it will get Honeycomb “as soon as it’s ready.”