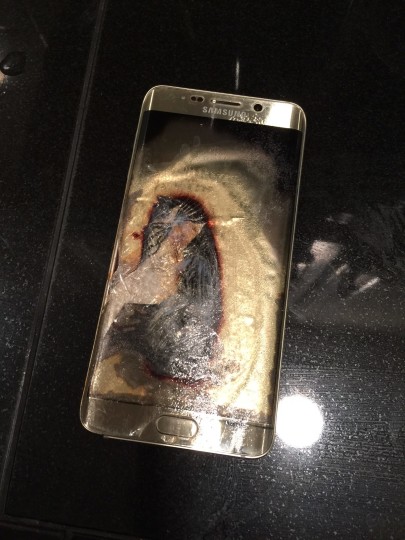 A Galaxy S6 Edge+ user found his phone on fire, with its internals melting shortly after unplugging it from the charger. He removed it from the outlet after noticing the phone was overheating while still on the charger.

Devices catching on fire, or overheating to the point where its internals are melting, is no regular occurrence. Issues like this can still arise nonetheless, regardless of how careful a user is. For example, in 2014, a girl’s Galaxy S4 overheated and woke her up with noxious fumes.

Most are probably wondering if he was using an OEM charger or a third-party one. According to this user, he was using the official Galaxy S6 Edge+ charger. Nevertheless, overheating still occurred.

While it is very possible the device burned up with no fault to the customer, we don’t know what is true and what isn’t. He could’ve left it charging too long before removing it from the charger. He may have left the device sitting directly in the sun. He could’ve done so many things that the device just couldn’t handle.

At the time of writing, there is no response from Samsung. Let’s just hope that the user gets either a replacement device or his money back.

Owners of Galaxy devices might be looking at their phones in horror, but it’s highly rare for such an issue to occur. Mistakes in a collection of lord knows how many phones are likely to happen. Just make sure to use your official chargers and keep it out of direct sunlight for long periods of time.