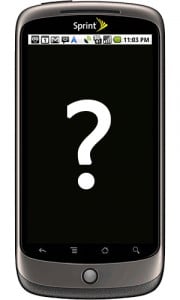 Say good bye to the CDMA Nexus One.  Like Verizon did a few weeks back, Sprint has opted to drop the Nexus One from its future handset roadmap.  Why, you ask?  Well, the EVO 4G is going to be a considerably beefier phone with (presumably) a similar price point.  According Gizmodo, a Sprint rep tells them that the “upcoming availability of the award-winning Evo 4G”  is a “more robust, full-featured device”, thus bumping the Nexus One.

And we were just telling you guys earlier why it was still a lock.  Obviously, we’d like to see the Nexus One arrive for Sprint, so we’ll keep crossing fingers.  Unfortunately, things look grim.