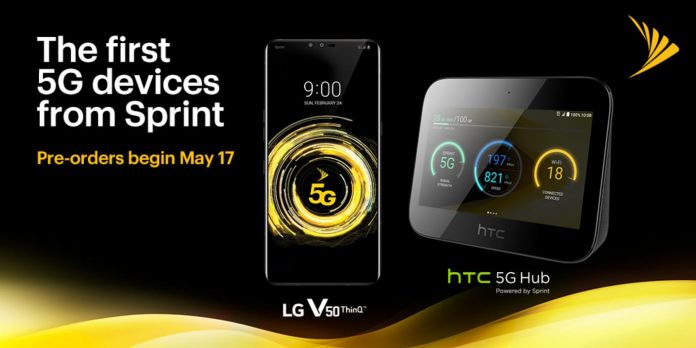 We may not know exactly when the Sprint 5G network gets turned on, but at least we know which devices will support it.

Sprint on Thursday announced it has started taking pre-orders for its first 5G-ready phone, the LG V50 ThinQ 5G. Moreover, it is also selling the HTC 5G Hub hotstpot.

The LG V50 ThinQ 5G will retail for $1,152 outright; however, Sprint will offer it for just $24 per month on an 18-month Sprint Flex lease. This is a special pricing for those who pre-order the phone and amounts to half off the cost.

Customers who want to take advantage of Sprint’s 5G speeds will need to sign up for the company’s Unlimited Premium plan. At $80 per month it’s $20 more than its standard Unlimited Basic option. For the extra money, though, subscribers get Amazon Prime, Tidal HiFi, and 100GB of LTE hotspot data.

Both devices start shipping on May 31 but it’s not clear when the 5G network will be activated. Sprint hasn’t made any overt announcements other than it will be available in Atlanta, Dallas, Kansas City, and Houston this month.

Those who want to utilize the hotspot on 5G will have to pay $60 per month for 100GB of ultra fast data. Worth noting, once that threshold is reached, speeds are throttled. Not to 4G or even 3G… but 2G. Keep that in mind in the event you were planning on changing your entire home around.