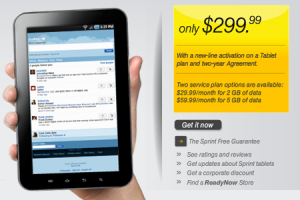 Sprint recently shaved $100 of the price of their Galaxy Tab where they now list it at $299.99 with a two-year agreement.  That’s a considerable chunk of money for a device that’s but a few months old.  We’ve heard that the tablet was selling well, so we expect this to give it an extra boost.

There are plenty of reasons as to why Sprint and Samsung might be dropping the price. One being that Mobile World Congress is but a few weeks away where we may see its successor unveiled. Another factor could be the looming Motorola XOOM and Apple’s iPad 2, both of which will likely look more attractive by comparison.  It’s also possible Sprint has something tablet-related that they want to show us next month.

It’s also worth noting that Verizon recently dropped the price of their Galaxy Tab as well.  Taking that into consideration, it might be something Samsung-wide slowly happening as we gear up for a new tablet.