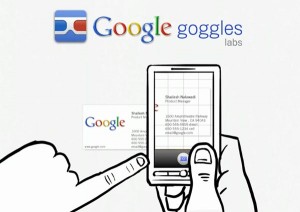 We all know that Google likes to start (or buy) a project and throw it to us in Beta in hopes that we will swarm it and love it. In many cases, that happens, and the swarmed projects get more development and more awesome. The projects that don’t make the cut, however, seem to kind of wither and dry up. I was concerned that Google Googles was one such project. There had been very little movement since it came to us, and it hasn’t really improved much either. So when Google released details to their next experiment with Goggles, it got me pretty excited to see what could be next.

The Experiment was detailed at the Google Blog, where someone decided that Goggles should be used in an almost “check-in”  or QR code like fashion. simply put, anyone who has partnered with Google for the experiment has placed the Goggles symbol on their advertisements. Snap a pic of that ad and Googles wil re-direct you to the mobile experience that accompanies the ad. If this continues to grow in popularity, Goggles could replace the QR system for providing layered information on Android perhaps. Here’s the video.